None
Gaus (ガウス Gausu) was a Kaiju that appeared in Ultraman 80.

When a giant red star dubbed "Red Rose" was on a collision course with earth, UGM planned to use most of earths nuclear missiles and use the Space Mammy to guide the missiles to the star. Their plan though would cost the life of four planets nearby including the planet Gaus, a inhabitated planet only Takeshi/80 knew about. Despite this the plan was set in affect and all the missiles hit Red Rose and blew it up in a megaton explosion. Though earth was saved a UFO soon came to earth and attacked several JSDF plans and Takeshi's jet. The UFO soon took shape as the monster Gaus, who mutated from the affects of the nuclear blast. He soon attacked the area but, was stopped by Ultraman 80. The two seemed evenly matached at first but, 80 gains the upper hand and almost fires the Succium Beam before the monster gave up and surrendered. Realizing that Gaus was just an innocent victim, he teleports him to another planet with similar conditions and lives out his new life on the planet. 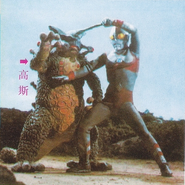 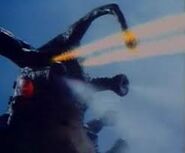 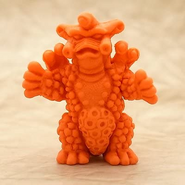 A Gaus eraser
Community content is available under CC-BY-SA unless otherwise noted.
Advertisement