The Ruler of Shadows, Gatanothor is responsible for the annihilation of the ancient humans that roamed the planet millions of years ago, having surfaced from the mythical city of R'lyeh. After covering the world with perpetual darkness, Gatanothor's reign of terror affected all life on the planet. But when the age of darkness neared its end, Gatanothor, along with its followers (called Zoiger) went into the ancient city of R'lyeh island and hibernated.

During modern times Gatanothor and its brood awoke once more. The Ruler of Shadows sought to have Earth revisit its dark past. But unlike the last time, a titan stood in Gatanothor's way: Ultraman Tiga. The Warrior of Light defied Gatanothor's rule and pledged to fight for humanity. After dismembering one of the Zoiger, Daigo summoned his courage, and the love he had for the entire human race. Ultraman Tiga arrived to face Gatanothor, but the Warrior of Light only had Daigo's light to power him, and he was easily defeated, despite the usage of the Deracium Beam Torrent and a modified Zeperion Beam in his Power Type form. Gatanothor then used a beam which turned Tiga back into a stone statue. Bellowing in triumph, Gatanothor struck the statue with one of his tendrils, knocking it down and leaving it to sink deep into the ocean.

Gatanothor now stood unopposed and allowed its darkness to sweep across the globe. There was nothing that could stop it or the Zoiger from ruling supreme. But the Ruler of Shadows didn't expect GUTS to band together to help stop the horrific beast. GUTS had enlisted Keigo Masaki, ex-host of Evil Tiga to help with Tiga's revival. His plan failed, but caused the people to unite. With humanity taking up arms and uniting, their hopes manifested into the forms of pure light, and poured into Ultraman Tiga's Color Timer. Ultraman Tiga was revived and later confronted Gatanothor in the ancient city. With great power never before seen, Tiga succeeded in easily sending the Ruler of Shadows to oblivion with a combination of Tiga's Glitter Bomber, two Glitter Banishes, Glitter Zeperion Beam, and finally the Timer Flash Special. The Earth and humanity was saved and the Sparklence disintegrated into dust soon after.

Although Gatanothor did not physically appear in the movie, its hatred and anger toward Ultraman Tiga were transferred to Camearra. After knowing Tiga/Daigo had fallen in love with another woman, the unification of the dark energy from R'lyeh allowed her to transform into her monstrous form, Demonthor.

Gatanothor's Spark Doll was seen in Dark Lugiel's collection room inside Furohoshi Elementary School, meaning a version of him fought in the Dark Spark War. It is assumed that he returned to space in his original form after Ultraman Ginga defeated Dark Lugiel.

Gatanothor appeared as a Cyber Card in the final episode of Ultraman X. After Ultraman X spoke out to Gomora and striked Greeza right in the center of his chest, Gatanothor, along with all of the other Cyber Cards, traveled to X and united with him. Cyber Gatanothor's power was used to help form the Hybrid Armor and power up the Ultimate Xanadium to defeat Greeza once and for all. Gatanothor, along with the numerous other Cyber Cards and Spark Dolls, then appeared and thanked Daichi as he thanked them. The Rainbow Land

Magatanothor (マガタノゾーア Magatanozōa) was one of the Lord Monsters created by Maga-Orochi, representing the element of Darkness. It was sealed away by Ultraman Tiga in the ancient past near the Ishtal Civilization.

Gai arrived on Earth in 1800 BC after receiving his mission from the Voice of Light to stop the revival of the Lord Monsters, and the first was Magatanothor. Jugglus Juggler, who dressed up as a mummy under the alias Nuru Ra Hotep, acted as the leader of the religion Magacism (マガ教 Maga Kyō lit. Maga-Teachings), a cult that praises Magatanothor. He spread his teachings of the end days to come to the people of Ishtal, saying Magatanothor will arise and bring destruction. Magatanothor was freed through Dodongo's Kaiju Card which Juggler obtained after Ultraman Orb had defeated it earlier, wreaking havoc and destruction to the buildings of Ishtal. Gai transformed into Orb and fought it in an intense battle that released so much heat the nearby sand turned to glass. Orb defeated it after a tough fight but the battle caused Ishtal to turn into a place known as Kemati Buki (Hill of Death) (ケマティ・ブキ (死の丘) Kemati Buki (shi no oka)), as well as spawning the theory of an ancient superscience war that scientists thought of 4,000 years later. Juggler took off his disguise and collected Magatanothor's Kaiju Card while Gai receives Ultraman Tiga's Ultra Fusion Card from the defeated Lord Monster. 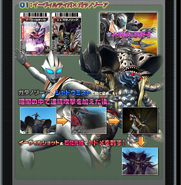 Gatanothor also appeared in the game, Taiketsu! Ultra Hero as a playable character.

Gatanothor appears as a boss character for both the Ultra Mode and Tag-Team Mode. However, he is not playable himself. Mainly, it is because he can't move on land and he has a special attack that can't be blocked. Gatanothor can be defeated by either normal or Glitter Tiga depending on the player's gameplay.