Garourar was created by Armored Darkness and with Zarabon, they were ordered to attack the Land of Light and it's inhabitants with an army of Jackal Saucers. While Garourar managed to evade incoming attacks from the Inter Galactic Defense Force and the Ultra Brothers, Garourar eventually defeated after the Ultra Brothers reflected his black hole attack, sending himself to the black hole of his own creation.

In this non-canon stage show, Garourar (under Armored Mefilas' command) and other fan-made monsters (Zarabon, Jiorugon, Alien Endeal etc.) joined forces to attack the Ultras. Eventually, they were defeated by the trio Heisei Ultras, Tiga, Dyna and Gaia and the Ultra Brothers. 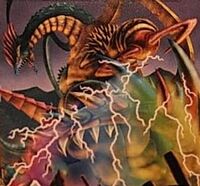 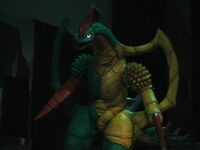 Retrieved from "https://ultra.fandom.com/wiki/Garourar?oldid=532372"
Community content is available under CC-BY-SA unless otherwise noted.