Ultraman Leo episode 22 "The Leo Brothers vs the Monster Brothers"

Garon (ガロン, Garon) and Littre (リットル Rittoru) are twin Kaiju that appeared in the TV series, Ultraman Leo. They appeared in episode 22. A pair of monster brothers adept at using teamwork to help them in their fights, Garon and Littre proved to be more than a handful for Leo, until Astra arrived to even out the battlefield.

Garon and Littre were monster brothers who had come to Japan to cause havoc. Garon was the first to surface, and was quick to cause destruction. When MAC arrived on the scene, Garon's flares quickly downed their jets. Before Gen could transform into Ultraman Leo, he was distracted by helping a boy save his younger brother from rumble caused by Garon's rampage. Although the younger brother was saved and sent to the hospital, the mental damage was done and Gen was not going to let Garon get away. Ultraman Leo was summoned and battled against Garon viciously. Just as it seemed that Leo was going to win, Garon's brother, Littre came to the surface, and both monster brothers double-teamed Leo, overwhelming and beating down the ultra viciously. It wasn't until Dan Moroboshi used his Ultra Psychokinesis to confuse the brothers that they burrowed underground, leaving many casualties in their wake.

Sometime later, both Garon and Littre resurfaced and resumed their destruction from before. This time Gen was quick to respond and transformed into Ultraman Leo. Unfortunately, Leo again was no match for the monster brothers' combined strength and was soon overwhelmed. Suddenly, a red ball of energy fell from the sky and landed in the middle of the fray. The red ball quickly formed to reveal Leo's long-lost brother, Astra, who had survived the destruction of Planet L77 as well. With the odds now evened, the Leo Brothers soon turned the tides of battle. Both Garon and Littre were ultimately destroyed by Leo and Astra's Ultra Double Flasher. The Leo Brothers vs the Monster Brothers

Garon in a stage show 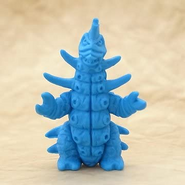 A Littre eraser
Community content is available under CC-BY-SA unless otherwise noted.
Advertisement