SSSS.DYNAZENON episode 10 "Which Memories Do You Regret?"
Garnix (ガルニクス Garunikusu)[1] is a Kaiju that debuted in SSSS.DYNAZENON. It naturally appeared at giant size without being controlled by any of the Kaiju Eugenicists.

Garnix suddenly appeared and was sighted by the Kaiju Eugenicists. Mujina attempted to take control of it, but suddenly saw a flashback of Gauma in the past. She and the Kaiju suddenly disappeared. The other Kaiju Eugenicists and the building near them also mysteriously vanished, with Sizumu saying "Now we can all be free." Garnix started to attack the entire city with its powers, causing people and buildings alike to disappear. Gauma, Koyomi Yamanaka and Yomogi Asanaka attempted to attack the Kaiju through its mouth to rescue Yume Minami, who had also disappeared. However, by the time they reached a rooftop Yomogi was the only one left. He jumped into the Kaiju's mouth, and was able to see the memories of others before he himself was transported to his past where his mother invited him to see Mr. Kamijo. To save his friends, Yomogi took hold of Dynasoldier and forced his way into their memories/pasts to remind them of their duty, starting with Yume, and then Koyomi, and then Gauma and Knight. Upon breaking out, Dynazenon and Gridknight combined into Kaiser Gridknight and destroyed Garnix by slcing it in half with the Kaiser Knight Circular, bringing everything back to normal. Which Memories Do You Regret?

Super Speed
Add a photo to this gallery 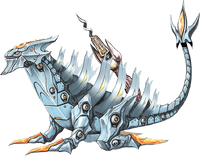 Retrieved from "https://ultra.fandom.com/wiki/Garnix?oldid=540772"
Community content is available under CC-BY-SA unless otherwise noted.