When the Alien Godmes where sick of Koseider's medling, they created a giant monster, Gariasu! The beast went on a rampage in prehistoric earth, taking down other dinosaurs easily. It followed the Koseidon Corps into the traveling dimension, and attacked the crew's ship. It then warped into the Stone Age, where it fought several cavemen and killed some. When Koseider suddenly appeared, the beast, being well over 30 meters tall, dwarfed the red hero. But, after a well time diving move, Koseider plowed his way through the beast's chest, killing it. 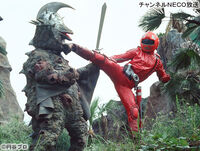 Add a photo to this gallery
Retrieved from "https://ultra.fandom.com/wiki/Gariasu?oldid=536361"
Community content is available under CC-BY-SA unless otherwise noted.