"Humans of Earth. Surrender immediately, and hand over the prince of Planet Gold. You have 44 minutes in Earth time to comply. Failure to do so will result in the petrification of all life on Earth's surface."

―Gargorgon's words in An Oath Beyond Worlds

Gargorgon's name is a combination of two mythological beasts: a Gargoyle and the Gorgons (Medusa's species).

Alongside Rudian, Gargorgon was designed by Masayuki Gotoh, while supervised by Takanori Tsujimoto. Tsujimoto requested Gargorgon's body type to be more feminine, and her "eye-less" facial feature to invoke the image of a demon.

Long ago, Gargorgon arrived on Earth and turned a large civilization into stone, which later sank beneath the waves. She also stormed the home of Alien Gold tE-rU and attacked it to take the energy from Planet Gold.

In the present, Gargorgon returned to Earth, specifically Area T-94, to find and destroy Rudian, who currently had the energy of Planet Gold inside of him, but she was met with opposition by both Rudian and Ultraman X who, along with UNVER and Xio, attacked Gargorgon. Rudian distracted Gargorgon with his miniguns and the latter X activated his Cyber Eleking Armor and fired his Eleking Electric Shockwave at her which may have scored a direct hit, but she got back up and got the advantage over both the machine and the Ultra with her lightning and tail attacks and then she used her shoulder heads to grab X and kept hitting him with her claws but Rudian managed to fire a couple of missiles to make her let go of X. Eventually she got mad and fired her Petrification Ray at Rudian, but X took the attack for him and got turned to stone in the process but not before X fired an energy blast at Gargorgon making her retreat 400 m away from Earth. The Man With the Memories of a Planet

From there, she released a broadcast: surrender to her superiority and give her tE-rU in 44 Earth minutes, or else all lifeforms on Earth will be petrified. Xio branches from all over the world tried to launch destroy the feminine monster with missiles, but Gargorgon used the her beam launched from her hidden eye to destroy them all and absorb their energies.

Gargorgon then traveled back to Earth after Rudian and the Xio patrol vehicles showed up to confront her, but Gargorgon dominated over Rudian after firing their weapons at each other. She was about to suck up all of the energy from Planet Gold and turn both Rudian and Alien Gold tE-rU to stone, but then Wataru, Hayato, and Asuna fired their Ultlasers at Gargorgon's hidden eye, leaving it injured and reverting all of Gargorgon's stone victims back to normal.

After being turned back from stone, X fought Gargorgon once more and started the fight by gaining the upper hand in combat and got her away from Rudian long enough for him to be turned back to normal. They fired energy blasts and minigun ammo at Gargorgon, but she brought up a dust cloud to cancel out the attacks and regenerated her injured eye. After X summoned his Cyber Bemstar Armor, absorbed Gargorgon's Petrification Ray and fired it back her, turning her to stone, Rudian finished her off once and for all by firing his energy bullets at Gargorgon until she finally exploded, ended her threat on the universe once and for all. An Oath Beyond Worlds

Gargorgon reappeared as a Cyber Card in the final episode of Ultraman X. After Ultraman X spoke out to Gomora and striked Greeza right in the center of his chest, Gargorgon, along with all of the other Cyber Cards, traveled to X and united with him. Cyber Gargorgon's power was used to help form the Hybrid Armor and power up the Ultimate Xanadium to defeat Greeza once and for all. Gargorgon, along with the numerous other Cyber Cards and Spark Dolls, then appeared and thanked Daichi as he thanked them. The Rainbow Land

A Gargorgon attacked the home planet of Alien Kanon, only to be challenged by the War Deity. After a beam battle between Gargorgon's Petrification Beam and the War Deity's Energy Beam, the mythical beast is defeated when the enemy's beam overpowers its own Petrification Beam, which caused it to petrify itself and explode to pieces afterward. Last ~Fellow~

In reality, Gargorgon defeated the War Deity in the beam battle. However, before it could resume its rampage, a young Amate pleaded it to stop. Hearing the pleas of the child, the Kaiju transformed itself into petals that drifted along the wind.

A Gargorgon showed herself suddenly, emerging from the sky. She was hindered by Ultraman Rosso and Blu while advancing towards Aizen Tech headquarters. They were evenly matched until Gargorgon fired a petrifying beam which hit Blu after getting reflected off a building. Gargorgon tried to strangle Rosso but while struggling, Rosso saw his horns glow and summoned the R/B Slugger Rosso for the first time. He slashed the kaiju's eye, reversing Blu's petrification.

Remembering that Gargorgon's attack could be reflected by mirrors, Rosso used the Aqua Mirror Wall to redirect another ray, causing the monster's own legs to turn into stone and become immobile. Blu slashed her eye again using the R/B Slugger Blu and after that both brothers performed the Cross Slugger attack, blowing her up. Welcome to Aizen Tech

Kengo Manaka transformed into Ultraman Trigger to fight against the monster, but struggled at first until Mitsukuni Shizuma donned a remote-control set to aid Trigger by piloting the GUTS Wing. After getting one of its side heads shot, Gargorgon attempted to petrify Yuna, but Yuzare's spirit appeared from within her and blocked the beam, only for Gargorgon to avoid another defeat by sidestepping its reflected beam. The GUTS Wing and Trigger continued to fire at Gargorgon and maanged to disable her other side head and strike her eye, just in time before the GUTS Wing turned to stone from its petrification ability. Trigger used the Circle Arms to slice Gargorgon in half with the Zeperion Sword Finish. The Wings of That Day

Gargorgon is released as part of the Ultra Monster X series. She is the first deluxe class figure (6" instead of 4") and comes with a Cyber Gargorgon Card.

Gargorgon's figure is a teal blue color, with yellow and reddish-orange highlights. Her eye is painted with veins, and she has detailed scales covering her body. Only one of her tails is articulated, which allows it to rotate. She also has waist and arm articulation. 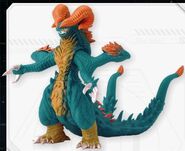 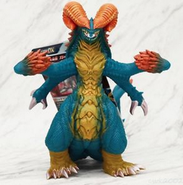 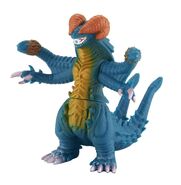 Gargorgon with her eye damaged 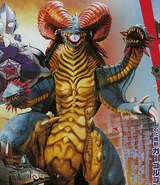