None
Garan (ガラン, Garan) was a Terrible-Monster that appeared in episode 4 of Ultraman Ace. It was transformed from an ancient fish from Devonian period of the Paleozoic era by Yapool's Terrible-Monster Creating Machine.

Garan used to be a fish-like creature from prehistoric times, specifically 3 million years ago. Hokuto, Minami and Yamanaka went to pick up the fish as a carcass. Mikawa has a reunion with a high school friend of hers. The high school cartoonist Kuri, drew a comic showing the truck that carried Garan, fly off. This occured and Mikawa felt that Kuri was skechy and tried tp leave but was soon ambushed, gassed, and was locked in the attic. At this point, Yapool had the artist release Garan, now a Terrible-Monster, who fought TAC and won. He was called back by the artist, though. Mikawa was trying to contact TAC, but the artist told her it was useless as the house lacked radio communication and about how he gave his soul to the devil (refering to Yapool). He tells her he would release her if she married him, but she was rescued by TAC. However, with this the artist soon summoned Garan with the command to attack TAC and find and capture Mikawa. She takes one of the planes to fight it, while the others attack from the ground at an oil refinery, but Hokuto's jet is soon hit, so he ejects and he and Minami transform into Ultraman Ace. They two fought but it seemed to have the upper hand as the artist kept drawing fight scenes, but soon Ace found out their life forces are connected. Ace blasts off one of Garan's arms and shoots him with the Punch Laser, causing him causing him to catch on fire, before finally destroying him with the Metalium Beam, killing the artist in the process. 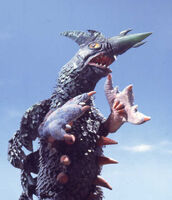 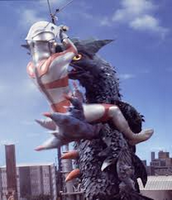 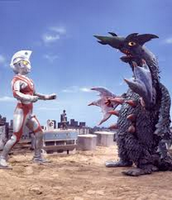 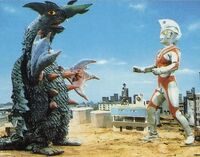 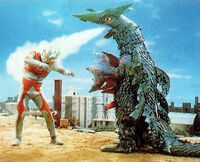 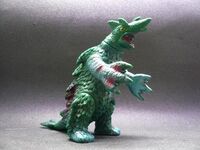 Figure of Garan, created by Popy. 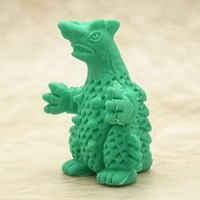