Garadoras was a natural monster that lived within a lake within the Japanese countryside until photographers came to the area constantly waking him up. The Scientific Defense Guard was shocked to discover that they were turned to stone upon arrival and sent Choichi into the lake to find the cause. Shortly after diving in a glass tube, Choichi discovered Garadoras sleeping and told his teammates the monster should not be disturbed. However, more photographers came to the area seconds later with helicopters, causing Garadoras to wake up furiously. Garadoras went on a rampage and managed to down the Scientific Defense Guard with Choichi turning into Ultraman Joneus shortly after. Joneus managed to throw Garadoras into the lake and had little difficulty beating the monster up before knocking him out with the Planium Beam, sending him back to the lake's bottom. After the fight, Joneus restored Garadoras' victims to normal. 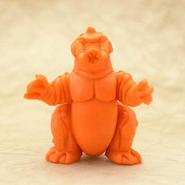 A Garadoras eraser
Community content is available under CC-BY-SA unless otherwise noted.
Advertisement