None
Ganza (ガンザ, Ganza) was a giant crustacean Kaiju that appeared in episode 7 of Ultraman Taro.

ZAT got word of a giant monster sighting and used one of their fighters to search for it. Upon finding a small island, they decided to land on top of it, unaware said island was the back of the crab monster Ganza. When the monster Tagarl arose off the shores of Japan, Ganza followed, attacking the giant octopus monster with gusto. The mollusk did not take this sitting down, and beat Ganza back with his massive tendrils, seemingly winning. The massive cephalopod fired a jet of ink into the crustacean's face, and was rewarded with Ganza's massive pincer in his eye. As Tagarl slowly sank and died, Ganza came ashore to attack Japan. It wasn't long before Ultraman Taro came and fought the beast, destroying it by ripping off its tail, revealing that Ganza was a female and that she was pregnant. After the beast died, she turned into a bunch of smaller crabs that scuttled away. 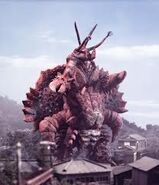 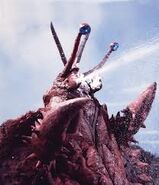 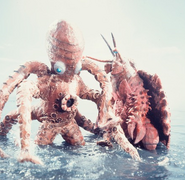 Figure of Ganza, by Marmit. 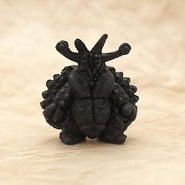