Gango (ギャンゴ Gyango)[1][2] is an ephemeral Kaiju created by the Wishing Stone. After getting up to mischief when the human who came into possession of the Wishing Stone was knocked unconscious and left unable to control him, Gango disappeared when the man came to his senses and willed the monster out of existence. Ultraman then carried the wishing stone away for safe keeping, where it could be kept away from others who would use its incredible powers to wreak havoc.

Gango's name originates from the English word "Gang," which recaps the fact that Gango's rock was stolen by a gangster.

Originally a small space rock capable of granting any wish, Gango was created after a criminal got his hands on the space rock. Wanting the rock to do his dirty work, the thief wished for a Kaiju to do his bidding, creating Gango. After using Gango to scare people for his enjoyment, the criminal wished for Gango to grow to a gigantic size, and that it did! The Kaiju smashed through the walls and ceiling, causing the structure to collapse and unintentionally injuring the man, sending him into a coma. With the criminal unable to tell the Kaiju to stop, Gango began a relentless assault!

It was met by the SDF and the Science Patrol, but all their weapons could do was sever one of its radar-like ears, which sent Gango in an enraged frenzy. Finally Shin Hayata transformed into Ultraman, to stop the kaiju, but Gango's cowardly nature took the "fight" long enough for Ultraman to weaken. As it saw that Ultraman was running out a time, the criminal awoke from his coma. Seeing what his creation was doing, he wished the creature away. The towering Kaiju turned back into the softball-sized space rock and was gathered by Ultraman and taken back into space.

In episode 7, Gango along with a lot of other monsters are seen cheering on Ultraman Ginga as he fights Dark Galberos.

Gango was a monster which Biranki summoned via her brain waves to destroy an alien city, resulting in her imprisonment in Planet 484 in the first place.

After Jugglus Juggler freed her from prison, Biranki summoned Gango again, along with 5 other unknown monsters, and they were all destroyed with a single Orb Ground Calibur from Ultraman Orb. 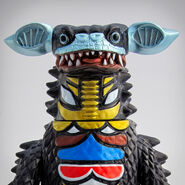 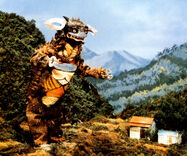 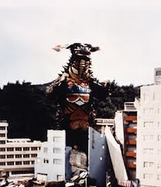 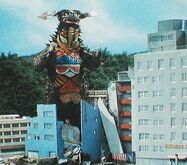 Gango and Gavadon Behind The Scenes

Gango's anatomy, note the stone in his stomach.

Gango from a stage show

Gango's Rampage in the Ultraman Manga (1968) 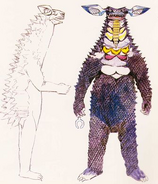