Gandar (ガンダー Gandā)[1] is a Kaiju that appeared in the TV series, Ultraseven episode 25. Brought to Earth by the Alien Poll, the alien race responsible for the Earth's ice age.

Planted under the Ultra Guard's main defense base, the monster waited as his masters froze the land and base. As Dan wandered around and fell in and out of consciousness from the snow, the Alien Pole revealed themselves and unleashed Gandar on the UG Base. Having lost the Ultra Eye in his attempt to return to base, Dan summoned the capsule monster Miclas.

The two beasts fought for what seemed like hours, tossing one another about as if rag dolls while Dan traced his steps, trying to find the lost Ultra Eye. Gandar, however, managed to tip the scales in his favor and defeat Miclas with his ice. As he did this, Dan recovered the transformation item and transformed into Ultraseven.

As Gandar continued to beat the already defeated Miclas, Ultraseven appeared and immedietly flew off towards the sun to recharge his energy. Seven then returned and used his Ultra Will Power to flip Gandar, making him lose his sense of direction. Soon after, Seven threw his Eye Slugger at the snail-like monster, cutting off both his arms and head. Gandar then rumbled forward and fell into the snow, dead. Showdown at 140 Degrees Below Zero

Although not physically seen he was seen in an animated flashback as part of a monster army lead by Alien Empera in the Ultimate Wars in episode 25 of Ultraman Taro. Burn On! The Six Ultra Brothers

After Sevenger stopped the petty squabble between Eleking and Gazort, it was blind sided by Reconstructed Pandon. As the two collossal beings met in combat, with Sevenger downing the Alien Ghose beast with a head butt, three roars rang out over the valley. Gandar, along with Garamon and an Alien Icarus appeared on a cliff side, jumping down to assist the double headed monster. As the four surrounded the mech, Jugglus Juggler slashed at the Icarus alien, downing him and delivering a pep talk to the mech, and with the assistence of a then arriving Ultraman Z Beta Smash where the tables turned, and Gandar was destroyed along with the other three.

Gandar is set to appear in the data cardass game, Mega Monster Rush Ultra Frontier. His body is covered in blue plasma crystals that, when destroyed, act as game points for the player. 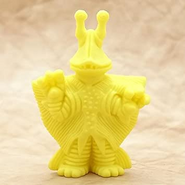 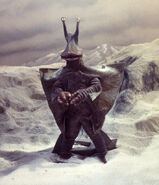 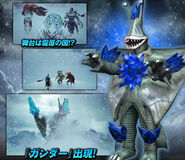 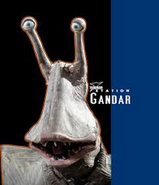 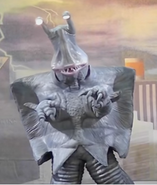 Gandar from a stage show