"The eye isn't emitting any physical energy... which means it's acting in defiance of the laws of physics... but that's impossible..."

Gan-Q (ガン Gan Kyū)[1][2] is an unorthodox Kaiju that first appeared in Ultraman Gaia. The very first Gan-Q in that series initially appeared as an eyeball-themed monster with no sort of origin. Later at some point in the series, it was revealed to be a manifestation of an ancient sorcerer Kijuro Mato, wanting to harvest the power of the Radical Destruction Bringer.

Due to its popularity, Gan-Q has gone on to make a number of appearances over the course of the Ultraman Series, usually appearing in his Code №01 form.

The exact origin of Gan-Q was monster form manifested by Kijuro Mato in the Warring States period of Japan to assassinate those who prepared to fight against the arrival of Radical Destruction Bringer, wanting to harvest the destroyer's strength for global conquest. Unfortunately his plan was discovered and Mato committed suicide to avoid capture.

500 years later at the time of Gaia and Agul became active protectors on Earth, Gan-Q initially appeared as a large eyeball submerging on the ground (Code №00), using its physic powers to fling rocks at the XIG Fighters during their training and deliver mental torture towards Gamu Takayama at the Aerial Base. Gamu impulsively ordered the pilots to commence their attack but Gan-Q simply absorbed both missiles, repelling one back to Yoneda's aircraft before retreating underground. Later on, Gan-Q resurfaced on an oil refinery, rampaging with a humanoid body (Code №01) created from the missiles, minerals and rocks it absorbed. When XIG arrived and began their assault, Gan-Q tried to absorb Peace Carry until Ultraman Gaia saved the aircraft in its mid-process. Gaia started to have the upper hand before he was absorbed into Gan-Q's body, tortured by unending laughter until he escaped by erupting from the monster's head simultaneously killing the monster, blowing it into pieces. The Ridiculing Eye

At some point after Gokigumon's death, Kijuro Mato's ghost returned in the damaged body of Gan-Q to search for the sorcerer's current descendant. When XIG's Team Lightning arrived and attacked Gan-Q, he disappeared. At the same time, Mato's descendant, Shusaku, who had received Mato magic powers after the arrival of the Kaiju C.O.V., was being harassed by Mato's soul. XIG learned of Mato's involvement in the past and therefore sent Gamu to protect Shusaku, giving the boy his courage to defy his sorcerer ancestor. Unfortunately this wasn't enough as Mato puts the boy in a hostage crisis in exchange of his friend's life. Shusaku was drained of his power and Mato used it to restore Gan-Q into Code №02.

Gamu transforms into Gaia, but was tortured by Gan-Q's new abilities, including the use of several eye saucer-like supports. Shusaku would destroy the probes and reclaim his stolen powers to weaken Gan-Q, giving Gaia the opportunity to transform into Supreme Version and destroy the monstrosity with his Photon Stream.

The 2nd monster controlled by Kate and unleashed upon Gomora when her Fire Golza fell, Gan-Q opened up with a series of shots from his eye cannon. Gomora quickly dodged, leaping to the side. The blasts continued flying until smashing into the rising Fire Golza. His ally fell, his entire body being engulfed in an explosion. The loss of her monster didn't affect Kate who called her monster back just as the rest of ZAP SPACY arrived. While her fiery Golza was gone for good, her Gan-Q would come in handy again.

After fooling ZAP SPACY into believing Rei had attacked and demolished much of the human population of Bolis, Kate attacked the team and left the Pendragon damaged. She then followed Rei, locating him after he defeated the monster Twin Tail. Gan-Q attacked Litra and she demanded a battle between Gan-Q and Gomora, but Rei declined.

She had another way of forcing him into battle: use a hostage! She made Oki appear before Gan-Q, restrained by chains. When she demanded that Gan-Q kill the human, Rei gave in and released Gomora! The two titans battled, but it took more than the combined might of Gomora and Litra to tackle such a juggernaut.

As the battle raged, the Pendragon flew in, newly repaired and armed. Flying by Litra's side, the ship unleashed its Hyper Omega Cannon on Gan-Q. The beam exploded on the strange beast, sending it crashing to the ground in a fit before its entire body was destroyed in a titanic blast.

Gan-Q returns in the film Mega Monster Battle: Ultra Galaxy Legends The Movie as one of Ultraman Belial's 100 Monster Army. He was killed by Ultraseven's Eye Slugger during the final battle.

Gan-Q reappeared in episodes 1, 2, 5, and 6 of the miniseries, Ultra Zero Fight, as Gan-Q of the Nonsense (不条理のガンQ Fujōri no Gan Kiu), as a part of "The Four Beast Warriors of Hell".

In this short series, Gan-Q was one of the many monsters revived by Alien Bat (along with Red King, Galberos, and Bemstar) to battle against Ultraman Zero. Shortly after Ultraman Zero killed Galberos with his Zero Sluggers, Gan-Q teamed up with Bemstar to battle Zero by using their absorption and redirection abilities to fend him off. While it was mildly successful at first, Ultraman Zero managed to transform into his Luna-Miracle form and managed to destroy both Gan-Q and Bemstar at the same time by destroying them from inside out their absorption regions.

Gan-Q reappeared in this special as a monster Ultlived by Kenta Watarai. He along with Alien Akumania, who is Ultlived by Chigusa Kuno, to attack Mochiron, who was Ultlived by Misuzu Isurugi. They taunted him without stop until Gomora, who was Ultlived by Hikaru Raido, came and slammed the two big-eyed monsters against each other. Ultraman Ginga Theater Special: Ultra Monster ☆ Hero Battle Royale!

Gan-Q reappeared in this series, Monslived by Alien Guts Vorst.

Near the final, Vorst was sent to Monslived into Gan-Q and split into two to steal Shepherdon's energies. The UPG team witnessed this and begins an operation to save the monster by using a magnetic wave. Sho arrived at the scene and fired one of the two Gan-Q to save Shepherdon. He fired a Gudon-charged bullet from his Victory Lancer but a Gan-Q absorbed it (at the same time revealed that this Gan-Q was controlled by Alien Guts Vorst) and return fire at Sho, knocking him. Shepherdon regained his strength and pushed Gan-Q, knocking him down and stomped the monster rapidly but Vorst quickly turn the tables by swapping Gan-Q with Fire Golza and the Vorst clone/Gan-Q clone continued to absorb Shepherdon. The Live Base staffs completed their objective, managing the UPG Captain to fire a magnetic wave blast via the Base's parabolic antenna. Gan-Q was knocked down from the blast but it took Fire Golza's attention as he began to attack the base.

Sho quickly recover and transform into Ultraman Victory to save them and Hikaru into Ginga to save his leader. Victory and Ginga found themselves occupied while trying to save Shepherdon until Victory used King Joe Custom's Pedanium Launcher and fired all of Gan-Q's clones. The real Gan-Q was destroyed by UPG Captain Yoshiaki Jinno who used the Magnetic Wave laser that attached to the base's parabolic antenna and Victory's Victorium Shoot. Ginga morphed into Strium form and finished Fire Golza with Zoffy's M87 Beam. Despite all three monster and alien reverted to Spark Doll, but they were retrieved by Alien Chibull Exceller via teleportation. Nonetheless, Vorst's deed was done and Gan-Q's Spark Doll was used among of those needed for Exceller to become Five King.

In episode 11, Yoshida became a victim of Alien Akumania Muerte in his human disguise. He caught the boy, but Gan-Q tried to fight back, even though he was under the control by Alien Akumania and turned to giant Gan-Q. Even after Gan-Q was control by Alien Akumania, Yoshida still had his consciousness and try to gain Ginga's help, but failed. Later, Ultraman Victory appeared, after punching Alien Akumania with his EX Red King Knuckle, both of Ginga and Victory was beaten by Gan-Q, until the boy talks to Yoshida about their days together. Alien Akumania fires his eye ray, but it was absorbed by Gan-Q, and fired back to Akumania. Ginga changes to Ginga Strium and fires Zoffy's M87 Beam, while Victory summon his Shepherdon Saber, making a V-shaped slash to destroy Alien Akumania. The boy cries after Gan-Q told goodbye to him and apologizes to him. Ginga then uses his Ginga Comfort to transform Yoshida back to himself. In the last scene, Yoshida see's the boy hanging the Gan-Q Spark Doll in front of the basket of his bike, now that he knew how to ride it, causing Yoshida to be happy and smile in the end.

Bemstar and Gan-Q were summoned by Ultraman Tregear to wreak havoc on Ayaka city, the latter of which had Pega imprisoned within. The two monsters fought against Ultraman Rosso, Ultraman Blu, and Ultraman Geed. During the battle, Bemstar manages to lift up Rosso and drop him head-first into a building, getting him stuck there temporarily. The Ultras also discover that Bemstar's gorge is connected to Gan-Q's eye, therefore making any attack absorbed by Bemstar be launched back at them by Gan-Q. Geed/Riku Asakura later hears Pega's voice within Gan-Q, so the Ultras hesitate to fight their opponents until Rosso and Blu change forms to Aqua and Wind respectively. Combining their elemental powers, Rosso and Blu manage to rescue Pega by throwing a Splash Bomb and Storm Shooting into Bemstar's gorge, and then redirecting it through Gan-Q's eye, getting Pega out safely. Rosso then threw his Splash Bomb at Gan-Q's eye, encasing it with water, while Blu fired the Storm Shooting into Bemstar's gorge. The buildup of energy eventually destroyed both monsters from within. Ultraman R/B The Movie: Select! The Crystal of Bond

Gan-Q was one of the many Kaiju to appear during the Kaiju Busters series. A subspecies appeared in this game called Gan-Q Ice (ガンQアイス Gan-Q aisu). 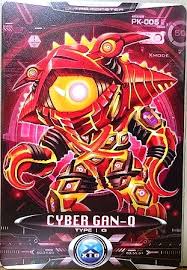 Using the data of Gan-Q's Spark Doll, a cybernetic/artificial version of it was created and contained in a Cyber Card, namely Cyber Gan-Q (サイバーガンQ Saibā Gan Kyu).

In Ultraman Ginga Theater Special: Ultra Monster ☆ Hero Battle Royale! Gan-Q's Spark Doll was among the imitations Spark Doll which created by Tomoya's drawings when an unknown force materialize them to life.

Later in Ultraman Ginga S, Gan-Q was revealed to be a part of Alien Chibull Exceller's collection.

A Gan-Q appeared in the series, disguising as the owner of Marukyū (丸九, Marukyū) restaurant. After Booska ate 80 bowls of ramen and has no other way to pay for them, the owner punished him and Pega into working in his restaurant to pay off their debt. While watching the antics of three aliens in a television show, Pega became suspicious of his behavior and sprinkled salt on his right knee, causing the owner to reveal his true form as Gan-Q. Despite the initial chaos, Gan-Q admits that he found the restaurant out of liking towards Earth cuisine. In exchange for keeping his identity a secret, Gan-Q decided to forgive Booska's debt and reduce his part time job to once a week. Ultraman New Generation Chronicle

In episode 154, a slightly altered (smaller head, no antennae) Gan-Q appeared with Zezezettototoso.

Gan-Q makes a surprise cameo in Boom!'s Power Ranger comic, being a monster made by Finster. 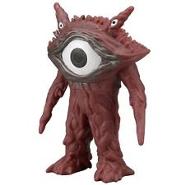 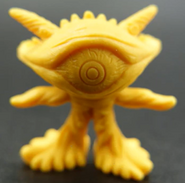