"If the Earth planned to abandon humanity, Ultraman wouldn't exist."

"You said that you have nothing left to protect. Its just an instinct of a fighter, only that you were being used without realizing it."

―Gamu to Fujimiya, The Resurrection of Agul

Takeshi Yoshioka
Gamu Takayama (高山 我夢 Takayama Gamu) is the main protagonist of Ultraman Gaia. He is a genius 20-year old university student who gained the red light of the Earth and the ability to transform into Ultraman Gaia. Additionally, he was a member of Alchemy Stars and invented much of the technology used by XIG, including the repulsor lifts that allow the Aerial Base and the XIG Fighters to defy gravity, before joining the organization himself to fight against the forces of the Radical Destruction Bringer.

Encounter with Gaia and recruitment into XIG

When the KHST begins its first wave of attacks on Earth, XIG is too new to be effective. Time stops and he falls through another light tunnel, where he encounters Gaia again. Because Gamu is so passionately concerned with the fate of Earth and humanity, Gaia's light becomes a part of him, and he is thus able to transform into the Ultraman when necessary. The first monster, C.O.V., is destroyed. Gamu joins XIG as a technical advisor, and later creates the Esplender to store the light that is the essence of Gaia.

With the appearance of Hiroya Fujimiya, a former member of Alchemy Star, his duty as an Ultraman becomes tougher as Fujimiya/Agul would always interfere him as he always think protecting the Earth only suits him. However, Gamu never gives up defend the Earth even tried to befriend Fujimiya multiple times. However, Gamu also tries to stop Fujimiya whenever he decides to eliminate humanity.

Banishment from XIG and gaining a new power

While XIG investigates Fujimiya, they also suspects Gamu for working with him as he later was banished from the team. When seeing Fujimiya killing Gomenos and for Gamu completely distrust him, they decide to engage in a battle against each other, drawing the attention of XIG. The battle completely cause their energies to sent to the wormhole where Zorlim feeds on it. When the monster appears, Gamu reveals that Crisis (Fujimiya's predicting machine) proven to be mysteriously defected, leaving Fujimiya yells out of anger for believing in the machine's lies and gave up on his duty as Ultraman and gave the essence of Agul's light to Gamu's Esplender before he was vanished from Zoruim's fireball. Gamu transforms into Gaia and found himself upgraded while using this newfound ability to destroy Zoruim and other monster afterwards. Commander Ishimuro rehires Gamu after he was proven innocent. What becomes evident to Gamu is that monsters like Tigris, Mizunoeno Dragon, Syazac, and Izac, are creatures of the Earth like humans are, and perhaps it is not so fair to eradicate them when their only instinct is to survive. As for creatures sent by the Radical Destruction Bringer, they are not inherently evil. When they are sent to Earth their first instinct is simply to survive in an alien environment. Thus, Gamu/Gaia questions his morals and human motives.

Return of an old ally

Sometime during Σ-Zuigul arrival, Gamu encounters a suicidal Fujimiya who tries to drown himself before Gamu saves him. Soon the destroyed fiend reformed. Gamu went to transform but, it was covered in metal. Surprisingly it was from those two blue balls he was hit with and it made him stick out his arms before he gets trapped in a crucifix like case and it goes into the robot's chest, entering a wormhole. Hiroya Fujimiya watches, feeling hopeless that he couldn't help Gamu as he had given his Agul powers before to Gamu, which was even not enough to defeat Σ-Zuigul before he is knocked unconscious by the attacks.

He soon has a dream about the people he meet including Gamu, some children, the KBC news reporter and his dead fiance Inamori.

Now knowing the mistakes he made, his will to redeem himself awakens the Blue Light of the Seas, which granted him with the stronger and more agile form of Ultraman Agul Version 2 from the ocean. Agul and Σ-Zuigul go to fight but, seeing Gamu he uses the Agul Saber to free him and breaks of one of his "wings". With the advantage he launches the Photon Screw at him, deflecting the missiles he launched and blowing the robot to pieces.

After Agul's light was restored, Fujimiya starts to supports Gamu for further assistance.

Following the invasion of Dobishi army, Gamu and Fujimiya lose their light to the Angel of Destruction, Zog. In the process, the two Ultras' identities are accidentally broadcast to the entire world after they are forced back into human form, prompting several deranged people to start witch hunts for them. With the help of his friends, Gamu manages to evade these people and with the KCB crew's assistance, who apologized for revealing his identity, Gamu made it to the Crisis computer to regain worldwide communications through the photon network. With the help of the Earth monsters and Alchemy Stars, Gamu and Fujimiya receive the light of the Earth sent to them, and transform for the final time to purge the Dobishi. Zog appears, and after a brutal battle, both Ultramen defeat her and save the Earth.

Afterwards, Gamu decides to continue his life as a normal student at his college while hoping for the XIG and the Earth monsters to replace him as the protector of the Earth.

Some time after Zog's invasion, Gamu has become popular among the students probably due to his former alias as Ultraman Gaia. While working on his computer, his friends introduce him to a girl who idolize Gamu much to his embarrassment. At the classroom, Gamu was caught by his teacher due to secretly talking to PAL before the XIG's Peace Carry interrupts and orders Gamu to assist them with his friends bid him a goodbye.

Along with Team Marlin, he was dispatched to track the S.O.S. signal which came from undersea. When they reaches the source of the signal, they were amazed by the light-emitting seahorses, which believed to be the Undersea Civilians. However, when they witness Gakuzom emerge out of the sea and make his way to the city, the seahorses replenish Gaia's light once again enabling him to transform into Ultraman Gaia and appeared in the city, ready to battle and help Ultraman Agul. As the fight raged between the stronger Ultraman and Gakuzom, the aquatic creature summoned all of his legion to come to him. The body of Gakuzom began to morph and change, the creature gaining claws and new armor while attacking Gaia. His most powerful attack was simply absorbed into its chest and converted into the strange energy it manipulated in its claws. The beam sent Ultraman Gaia flying backward, but Ultraman Agul would soon find enough energy to help attack the beast once more. With both heroes weakened, it didn't take long for Gakuzom to overpower them, blasting them both back with its energy blasts. The monster looked grim for the heroes, but the undersea civilians the waves emerged, re-energize the Ultras with their energy. The two giants both fired their weapons. The two attacks entered the energy converter and overloaded it. Within a few seconds, what remained of the mighty monster was raining around the battlefield. Afterwards, Gamu bids farewell to Fujimiya as they went on their separate ways.

Gamu returns in this series, along with Hiroya Fujimiya. He first appears at the lab where Shouhei and his team have the Tree of Life's seed that started growing and notes that the tree is growing at in a mutated manner before saving both Shouhei and his partner with his anti-gravity Repulsor Lift. Shouhei asks if he's the warrior of light sent by Amate which he denies and says that instead of Amate it was the Earth who called him to protect the tree. Gamu then wonders if the warrior of light is the ball of light flying to them, which turns into Gai.

Gamu introduces himself as Gaia and reached out to shake Gai's hand only for the 'alien' to grasp his hand for a while before they start talking business.

Gamu transformed into Gaia with Gai into Orb Origin the First when Shouhei is caught by a Bezelb, albeit a small one. He is the hit out of the sky by a larger Bezelb before Gaia kills it with a Photon Edge. Gamu continued to help Gai against the Bezelbs, and advised him about his relation with Jugglus Juggler, who he compared to his own friend Fujimiya.

After the defeat of Psyqueen, Gamu wished Gai good luck and returned to his own Earth.

In an alternate universe, Gamu was childhood friends with Daigo and Asuka, all three being fans of Ultraman. Gamu grew up to be a genius, but feeling pressured by the expectations placed on him ran away and became a tour guide at a museum.

After Daigo's talk about an alternate universe where they were Ultras, Gamu had a dream of his alternate self, being Ultraman Gaia.

Later, as Daigo fought the monsters attacking the city as Ultraman Tiga, Asuka and Gamu transformed into Ultraman Dyna and Gaia respectively to help him. With the help of the four Ultra Brothers and the revived Mebius, they managed to save their world. Great Decisive Battle! The Super 8 Ultra Brothers

Esplender: Gamu's personally constructed transformation device. To transform, Gamu thrusts the Esplender forward and usually shouts "GAIA!". Before the device's construction, Gaum would use a photoelectron tube with the Gaia force to transform.

The Popynica Plus Series XIG Fighter EX comes with a figurine of Gamu Takayama. 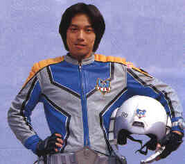 Gamu in XIG uniform while ready for combat