None
Gammas (ガマス Gamasu), also known as Gamas, was a Terrible-Monster created by Yapool in the series Ultraman Ace episode 9. It was created by combining an orchid flower with a space monster.

Yapool decided to make his newest attack plan on Tokyo, so he sent the Terrible-Monster Gammas to fight TAC. TAC expected the Terrible-Monster to come for TAC's aircraft is now loaded with new weapons. Before Gammas appeared, a photographer for a magazine decided to take a photo of the Terrible-Monster. Gammas appeared in a violet cloud and threw a razor disc at the TAC plane carrying the new weapon. The disc split the plane in half and the photographer took a picture of Gammas. Suddenly, Gammas was gone! The photographer decided to send the picture to her company but before she could, she had to pay the taxi driver the right amount of yen. The taxi driver looked at the photo while the radio played static. That was the cue for Gammas to literally jump out of the picture! Gammas became his normal size and attacked the city block. TAC was quick to respond to the attack. Gammas tried to take down the planes but he was too slow. He decided to shoot darts from his mouth but he missed. The TAC shot their newest missiles at the Terrible-Monster but they didn't kill him. Gammas went into hiding and entered his photo. Meanwhile, Yapool decided to give the Terrible-Monster a new weapon (A double bladed sword) and let him fight TAC again.

The photographer reluctantly gave a TAC member a copy of the photograph and they wondered why Gammas in the photo was holding a sword. TAC did a test on the photo and discovered that Gammas can jump out at a certain frequency. They burned the photo before the Terrible-Monster appeared. Before negatives can be taken away from the photographer, she admitted that the negatives will be handed to the chief edito to make 10,000 copies of the photo. At the magazine company building, the chief editor decided to shave his forehead. The frequency from the razor caused Gammas to jump out again! Gammas attacked but TAC was unable to defeat the Terrible-Monster. TAc fired their new missiles at the Terrible-Monster but he spilt one apart. A razor disc thrown by Gammas ricocheted off the TAC plane, but it was enough to shoot it down. Seiji Hokuto and Yuko Minami became Ultraman Ace and saved the TAC members just before the plane was about to crash. Ace seemed to get the upper hand until Gammas used spiked grenades and smokescreen in attempt to kill Ace from behind. Gammas tried to stab Ultraman Ace with the sword but he disappeared after Ultraman Ace kicked him off, losing his sword in the process. Having a difficult time fighting Gammas, Ace impaled Gammas where he was least suspected. After Gammas fell dead, Ultraman Ace used the punch laser special to blow up the Terrible-Monster. 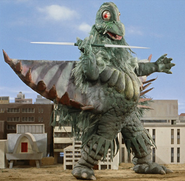 Figure of Gammas, by Marusan. 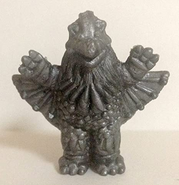 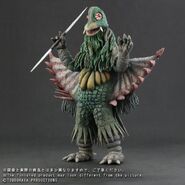 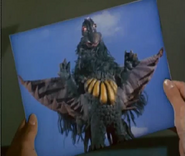