A long time ago, life on Planet Sarin was peaceful as robots served the Alien Sarin in their daily life. But some time later, robots started a rebellion and had taken over the planet, with the remaining Alien Sarin Dodole and his android "granddaughter" Carolyn fleeing to Earth.

The robotic monstrosity that had devastated the planet Sarin, Gamerot came to Earth in order to kill the two survivors of the planet. The robot soon arrived on Earth to begin his hunt. He was met with MAC counterattack the moment he had landed, but he then broadcast the reason he arrived on Earth, to kill the two aliens. MAC soon attacked but his beams quickly shot them from the sky with ease, still demanding the aliens be turned over to him. Gen refused to turn them over to the robot and helped them try to escape, but Gamerot kept firing after them with his energy beams. Thankfully, Gen transformed into Ultraman Leo to attack Gamerot. However, after bashing him to the ground, Gamerot extended his limbs and his armor proved all his physical attacks useless, sending him flying with one punch before stomping on his chest. But Carolyn intervened, firing at the death machine until he fired back, forcing her to take her true form. She flew straight into the machinery in his waist at high speeds. The resulting impact left him weakened heavily, and he tried to escape, but Leo pulled him down and began wailing on him, the machine's strength and reaction time weakened. Leo kept up his attack, tearing off Gamerot's arm, and then knocked him out of the sky as he attempted another escape. Gamerot was then left powerless as Leo delivered the Leo Kick, beheading the dreaded war machine. Malfunctioning, Gamerot flailed wildly before finally falling to the ground and exploding in a huge fireball, avenging Carolyn's sacrifice and the Sarin race. 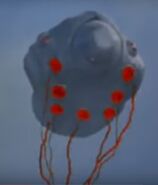 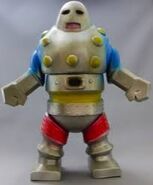 Figure of Gamerot, by Bear Model. 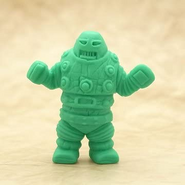 A Gamerot eraser
Community content is available under CC-BY-SA unless otherwise noted.
Advertisement