None
Gameron (ガメロン, Gameron) was a small turtle Kaiju that appeared in Ultra Q episode 6.

The name "Gameron" is derived from the Daiei  giant turtle monster, Gamera

Born as a regular turtle, Gameron was given a chemical by a boy named Taro in his biology lab. Little did anyone suspect that the chemical was actually a top secret mutagen that the school had been given by mistake. Later that day Gameron grew much larger and managed to scare off a pair of robbers that were trying to kidnap Taro. After Taro got on the turtle's back Gameron started to fly across Tokyo and went into the ocean to find the Ryūgū-jō.

Upon arriving, Taro met a young Otohime, the beautiful daughter of Ryūjin, the god of the sea. She was obnoxious, and started to anger him. After Taro used Gameron to follow her, Otohime created Kai Dragon out of a missile. She flew atop the dragon, and managed to fire a few fireballs, taking out the large turtle. Taro fell towards the sea, but Otohime managed to rescue Taro from drowning. She fixed his burned clothes and gave him a a box which will protect him as long as he didn't open it before she brought him back to reality. When Taro awoke, he told everyone about everything he experienced but they laughed, noting his story is similar to the legendary Urashima Taro. Forgetting the little girl's warning, Taro furiously opened the box, turning old but however awakened for real as the whole thing was a dream. Ever since the incident, Taro grown fed up with turtles except for his classmates, as all of them started to grow fond of turtles. 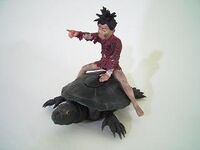 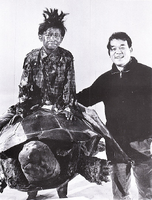 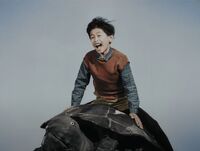