Gamakujira (ガマクジラ, Gamakujira), also called Gamakugira[1], was a Kaiju that fed upon pearls and attacked several farms and nearly endangering Pearl Oysters. After becoming detained by the SSSP, he was destroyed by Ultraman.

Feeding on pearls, the Kaiju Gamakujira drove pearl oysters into near extinction in a small part of the ocean. As a large load of harvested pearls was being moved along a highway, the creature rose from the depths to attack the transport truck, and to feed on the countless pearls that spilled out of it. The Science Patrol mobilized and began a counterstrike, but their rockets did little but agitate the pearl-eating monstrosity. As it began to head farther out to sea, it suddenly released a powerful stream of water from its head, damaging the Jet VTOL and forcing it to land. While the patrol was forced to camp out, the beast perched itself on some nearby rocks, chewing up the pearls it had gathered.

The next day, Gamakujira moved out to collect more pearls, but the Jet VTOL was repaired and joined by another. The forces tried their attack again, but their rockets still failed. The Kaiju headed for the nearby cities, but the patrol managed to hold it off and attach tracking balloons to its back, allowing them to keep an eye on it from the sky, even when under the water. Soon they deployed a gigantic electric net, but after breaking free, the beast was sent into an even fiercer rage.

Nothing in the Science Patrol's arsenal could stop it, and worse yet, its ripping of the net had brought down Shin Hayata’s craft. While Fuji tried to locate her friend, the forces continued to battle with Gamakujira, eventually striking its back with a much more powerful rocket. The rocket lifted its body into the sky, carrying it hundreds of feet as Hayata transformed into Ultraman. The hero gave chase, and upon reaching the creature, used the Air Body technique on the kaiju. Gamakujira was obliterated and the pearl oyster population quickly began to recover.

Gamakujira was one of the three monsters (alongside Takkong and Pestar) that were awakened in the water Planet Nuok after its inhabitants fighting against each other. Gai transforms into Ultraman Orb and defeated all three monsters. Gamakujira had a huge pearl in it that contained the Element of Water, which was installed into the Orbcalibur. 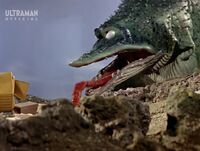 Long Tongue
Add a photo to this gallery 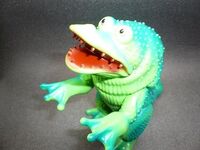 Bandai Gamakujira
Add a photo to this gallery 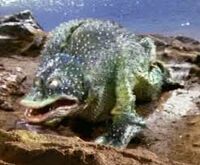 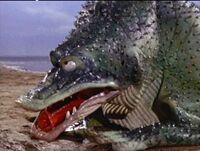 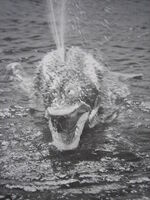 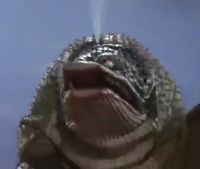 Gamakujira concept art.
Add a photo to this gallery

Retrieved from "https://ultra.fandom.com/wiki/Gamakujira?oldid=510785"
Community content is available under CC-BY-SA unless otherwise noted.