Tiga, Dyna, and Ultraman Gaia Novel: The Adventure in Hyperspace
Galra (ガルラ Garura) is a monster that appeared in the TV series, Ultraman Tiga. He appeared in episode 39.

Galra was an ancient monster of the same class as Golza and Melba. He first appeared in the middle of a city in Sector D and proceeded to rampage. GUTS was quickly on the scene to counterattack, but Galra's super dense skin was more than enough to protect him from their assaults. Once Galra noticed Daigo trying to save a woman who was trapped. Daigo transformed into Ultraman Tiga to stop the monster himself. Again, Galra's skin protected him from Tiga's attacks, but not from Tiga throwing him around. With GUTS still firing on him, Galra quickly escaped underground, barely missing Tiga's Zeperion Beam.

Later, Galra resurfaced in the K-3 District to resume his rampage. Thanks to the advice of Makio Kirino, a psychic man who was playing mind games with Daigo on his identity as Tiga, Daigo (and GUTS) was forced to fight the monster with their weapons, which still did not faze the monster's assaults. With no other option and with Rena of GUTS in danger by one of Galra's blasts, Daigo had no choice but to transform into Ultraman Tiga yet again to save Rena. The battle was at a standstill between Tiga and Galra until Tiga's Color Timer began blinking. Touched by Tiga's heroic actions for saving Rena, the psychic man exploited Galra's weakness in his neck. With the monster's weakness exposed, Tiga fired his Zeperion Beam through Galra's throat, instantly killing the monster. Dear Mr. Ultraman

Galra was one of the monsters captured by Charija to be sold, but was freed as his vanguards to secure the Red Sphere, outnumbering Ultraman Gaia. Through Tsutomu's wish, GUTS and Super GUTS were summoned to his world. Daigo intercepted Galra in his GUTS Wing 1, using his past experience with the monster to attack its throat. Tiga, Dyna, and Ultraman Gaia Novel: The Adventure in Hyperspace 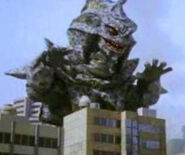