Galkimes is designed after the plant Ficus microcarpa.

Summoned by alien invaders, the giant life form appeared in the city and began to rampage. At first it seemed as though nothing could stop it until a red giant appeared, knocking him down. Although he attempted to put up fight, he was trounced, even the assistance of his allies' spaceship didn't help and he was killed by the Eye Slugger, followed by his allies via the Emerium Beam. DREAM 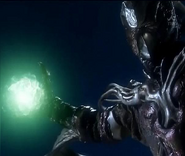 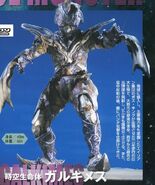