Many months later when Ren became Nexus's host, Galberos was revived once again, this time by The Unknown Hand to assist Mega Flash. With Nexus fighting two space beasts, the hero was soon overpowered by his adversaries. Ultraman Nexus however didn't give up and after the Night Raiders used the Ultimate Vanisher to destroy Mega Flash, Galberos was slain shortly afterwards by the Schtrom Sword. Revolt

A Galberos belonged to an Alien Nackle. He was first used (unseen) killing an Arstron that belonged to an Alien Zelan. Later on, Nackle summons him again to create hypnotic illusions of the monster Zetton to fight Rei and his Gomora. Whenever it seemed Zetton was destroyed, he would "return" to fight and tire out both Rei and Gomora into becoming weak. Once the duo was weakened enough, Galberos revealed himself and attacked the exhausted Gomora. Suddenly pushed to their limits, Reimon became overcome with Rayblood energy and rage, transforming him into Burst Mode Reimon, Gomora too gained the form Reionic Burst Gomora. Now with uncontrolled power, Gomora vaporized Galberos instantly and his master was short to follow.

Galberos was revived as one of Ultraman Belial's 100 Monster Army. He teamed up with Sadola, Alien Reflect, Vakishim, Hoe, and Tyrant to take down Litra. Galberos was then called back along with the other surviving monsters, when Reimon and Gomora went beserk, until Ultraman Zero showed up and then Galberos teamed up with the remaining monsters to take him down. Galberos was then seen as seen right after Red King was destroyed by Zero and was destroyed shortly after Zero hit him and got killed with a kick in the chest. Mega Monster Battle: Ultra Galaxy Legends The Movie

Galberos reappeared in episodes 1, 3, and 5 of the miniseries, Ultra Zero Fight as Galberos of the Daze (幻惑のガルベロス Genwaku no Garuberosu), as a member of the "The Four Beast Warriors of Hell".

In this short series, Galberos was one of the many monsters revived by Alien Bat (along with Red King, Bemstar, and Gan Q,) to battle against Ultraman Zero. Shortly after Ultraman Zero destroyed EX Red King in Strong-Corona form, Galberos hypnotizes the Ultra into fighting against ghostly illusions of his newly acquired Strong-Corona and Luna-Miracle forms. While after having some mild difficulty at first due to the illusions being fazed by all of Zero's attacks, Zero managed to fight through the illusions and as a result, Galberos was killed after Ultraman Zero sliced his heads open with the Zero Sluggers.

Galberos reappeared in episode 7 as Dark Galberos. He was transformed into a Spark Doll by Dark Lugiel along with all monsters and Ultramen. His host is Tsuyoshi Osata, a professional boxer, but retired reluctantly. Osata then was claimed as a loser by media, after a gambling incident.

He agreed to a wrestling match against Black King, and fought fairly until Ultraman Ginga was summoned. Then he created duplicates to trick Ginga, but he created his own to confuse the confuser. Ginga then used Ginga Fireball to transform Dark Galberos back into a Spark Doll. The Closed World

It is likely that Dark Galberos returned to space in his original form after Ultraman Ginga defeated Dark Lugiel.

Galberos (ガルベロス Garuberosu) is a three-headed cerberus Space Beast that created by Unknown Hand as Dark Faust's pet. Another Galberos was seen in the World of the Land of Light in possession of a Reionic Alien Nackle. 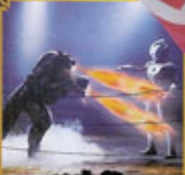 Flames
Add a photo to this gallery
Cyber Galberos

Dark Galberos became a Spark Doll in the conclusion of the Dark Spark War due to the Dark Spark's powers. His Spark Doll was kept in Dark Lugiel's collection, and given to Alien Nackle to give to evil-hearted humans and seed chaos.

This Spark Doll has been used on one occasion by one person:

After Dark Lugiel's defeat, Dark Galberos' Spark Doll is likely to have reverted back into its original form and departed Earth to return home.

Galberos was released twice by Bandai, once as a 6 inch figure and again as a Spark Doll. The regular figure was very accurate to the show, but had a little too much blue on the heads. It featured 4 points of articulation. The Spark Doll was black and blue, representing Dark Galberos from Ultraman Ginga. This figure is also very accurate, but the dog heads do not have teeth on one side. It featured 2 points of articulation and is 4 inches tall. All in all, both are very good figures. 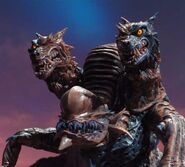 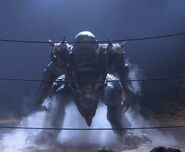 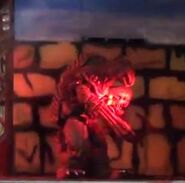 Retrieved from "https://ultra.fandom.com/wiki/Galberos?oldid=445586"
Community content is available under CC-BY-SA unless otherwise noted.