Ultraman Cosmos episode 62 "Cry of the Earth"
Galbas (ガルバス Garubasu) is a friendly monster that appeared in the TV series, Ultraman Cosmos. Galbas appeared in the 13th episode of the series. Another variation of him exists as Dolba (ドルバ Doruba) who was temporarily infected by Chaos Header into Chaos Dolba (カオスドルバ Kaosu Doruba), but was purified by Cosmos.

Summoned by Waroga, Galbas emerged from the ground just as Musashi was trying to take Reni away from a research institute to prevent her from being killed. Ignoring Musashi for time being EYES concentrated on Galbas. Musashi quickly turned into Ultraman cosmos to fight Galbas, but the creature easily overwhelmed the hero with his might. With a single fire ball, Cosmos flew trough the air before he slammed to ground hardly. Allowing Galbas to destroy a nearby electric plants just as Waroga arrive in his orb form to make matters much worse. The military proceed with an attack using tanks only for Galbas to destroy them and cosmos reverted back to his human form with his first loss. Galbas returned the next day to continue destruction for Waroga. After a quick analysis, EYES found a tracking beacon like the one of Reni's head in front of Galbas right ear. Once nightfall came, Military lined up another set of tanks to take Galbas out. However Galbas was not so much phased by the onslaught and tried to use the highway they were under to bury them alive. Once Reni used a special device in a secret facility that she and Musashi were, The chips near Galbas's ear and Reni's head were unable to function, Making the monster docile and neither of them in Waroga's control. Waroga came to the scene and proceed to blast Galbas with lightning bolts from his orb form. After Cosmos arrived at the scene to fight Waroga, It's assumed that Galbas went to underground.

Another monster of Galbas' species, this one was turned into Chaos Dolba by Chaos Header in order to foil EYES/JADFs' trap for Chaos Ultraman Calamity. Ultraman Cosmos came into battle once more against his evil twin, but the monster was ready for him. Cosmos later purify Dolba back to it's original state. After the hero unleashed his Golden Light Barrier and threw it at Calamity, the dark one fired back, blowing the guardian back. Reinforcements for Cosmos had come in the form of the JADF Defense Army whom began unloading on the chaotic villain. Dolba also participate the battle where he fights Chaos Ultraman Calamity, giving time for Cosmos. As Cosmos watched on, the infamous Monster Hunter fired a Chimera Missile into Chaos Ultraman's Color Timer. As it screamed in rage, Cosmos regained his stance and fired the Cosmium Ray, once again hitting the fiend and making it vanish in a show of light. What happened to Dolba later was unknown but it can be presumed that he went back underground. 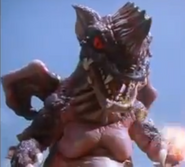