Galban first appears from an explosion in the mountains of an unknown planet. After wandering the planet, Captain Ultra and his crew attacks the beast. Their attack is a success when Captain launches a shot to the creature's exposed center. This causes Galban to explode.

Galban reappeared, alongside Reconstructed Vandelar, in episode 8. Galban is first spotted by a scout as he is sitting. When Galban senses the boy, he starts to rampage with the now newly rebuilt Vandelar. After destroying Mars City for a while uninterrupted, until Reconstructed Vandelar becomes controlled by Captain Ultra and Huck when they kill the Alien Vandels inside, proceeding the two monsters to fight. Galban seems to have the upper hand at first when he removes Vandelar's tail. But, Galban is later defeated by Vandelar's EMP body pulse. His remains are then tidied with the rumble of the destroyed Mars City. 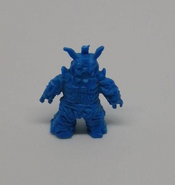 A Galban eraser
Community content is available under CC-BY-SA unless otherwise noted.
Advertisement