"Like all the other worlds before, it [Earth] will be reset"

Gillvalis created the Galactrons to wipe out its creators, the Kushia People and took over the planet. It then sent Galactrons across space to wipe out all sentient life forms, which Gillvalis regarded as obstacles in achieving peace, which was its mission.

After the disaster involving Maga-Orochi, peace had seemingly returned to Earth until mysteriously, several portal-like objects brought forth a gigantic robot. Soon after, Naomi Yumeno affectionately named it "Galactron", and the creature was researched by a group of scientists, including Shin Matsudo while being kept off-limits by VTL, eventually, the beast finally activated, going haywire almost immediately and capturing Yumeno. It soon stormed off into the still repairing Tokyo, where it rampaged, using its portals to wreak havoc across the city, soon enough, Orb appeared on the scene, who had the whole time had a suspicion of the organism, and subsequently tried to figure a way to defeat the beast without harming Yumeno, while Galactron scanned Orb for all of his weaknesses, unbeknownst to him. Orb then attempted to fight the beast, but to no avail, as Galactron's portals were too powerful for Orb. Orb retaliated by moving Galactron to the Inaccessible Forrest to save the city from being destroyed, Orb then transformed into his Hurricane Slash form and tried to use his Orb Slugger Lance to quickly defeat the beast, but Galactron grabbed the Trident like weapon away from him and tossed it away. Then it extended an enormous sword and impaled him, which seemingly killed the silver hero.

Galactron then tossed Orb aside, causing the Ultra to dissipate into particles from the lack of energy to fight. The mecha then communicated with the remaining men of the SSP and used its Galactron Spark to turn the peaceful landscape into a chaotic wasteland. Witnessing the destruction, Gai transformed into his Thunder Breastar form in a last-ditch effort to stop the robot. In this berserk form, Orb effortlessly destroyed the robot's shield with a boosted punch in the air, grounding the latter as a result. The Ultra then kicked it away and it soon got back up. Unlike Maga-Orochi, Galactron proved himself to be evenly matched in combat against Thunder Breastar. It then fired his lasers at the Ultra and launched its right hand via dimensional travel to attack Orb. Slightly hurt by Galactron's unprecedented technique, Orb managed to grab the remote-controlled mechanical hand and channel his dark energy to disable its function. Throwing it back at the mecha, Orb seized its braid and forcefully pulled it out, inadvertently disrupting its control over Naomi in the process.

Orb continued to brutally assault Galactron, with Naomi screaming with terror in captivity inside the robot. He ripped out Galactron's left arm and used it to hit the mecha until it was seemingly defeated. Before an enraged Orb could impale the robot with its own left arm, he managed to restrain himself as a result of Jetta's pleading. The robot capitalized on the opportunity to strike him with its laser beams, but Orb shielded himself with the ironic use of the mecha's arm. Before Galactron gets another chance to attack, Orb seals its fate by firing his Zettcium Beam at the robot, destroying it for good in an impressive explosion. Unfortunately, the mecha's demise indirectly resulted in the critical injury of Naomi Yumeno.

Sometime later, Galactron was rebuilt by Murnau and served her faction to turn the Earth into jewelry. He fought Ultraman Orb once again on an island. The two giants put up a good fight with each other with their swords clashing with each other and getting good at each other. After Orb dodged his modified Gem Spark, and looked on in shock, Galactron grabbed him with his braid and attempted to turn him into jewelry, only for a couple of sluggers to cut it off. The owner of those said sluggers was then revealed to be none other than Ultraman Zero himself, who came into Orb's dimension via his Ultimate Aegis. Galactron tried to hold his own against the two Ultra swordsmen, but he was proven to be no match for them. After Zero and Orb took out the robot's sword and arm cannon respectively, they destroyed Galactron with their Wide Zero Shot and Orb Supreme Calibur.

Galactron returned in this series where he was introduced to an audience by Kei Fukuide in his special lecture via his Kaiju Capsule form and claimed it to be a model he will use in his next project as inspiration for the "ordinary father" in his next story to become the Shining Knight, only for Kei to use his Riser to summon the said robot Kaiju and let it rage a path of destruction throughout the city. Later on, Kei revealed to the heroes of the show that if they kill him, it will stop Galactron, only for Leito/Ultraman Zero to be shown as a murderer. Riku Asakura then decided to take on Galactron as he transformed into Ultraman Geed.

Geed summoned his Geed Claw after he dodged the robot's laser beams and kept on hitting him with it, but to no avail at first, as his body was tough enough to handle it. Eventually, Geed managed to make Galactron stagger, but he quickly recovered and introduced his newest feature, his ejectable arm cannon which fired his lasers at him, tackled though him, and allowed Galactron to knock the Ultra down with his tail. Geed got back up and fought back, but Galactron dodged his attacks and overwhelmed him later on. As he was grabbing Geed by his shaft, Zero got his attention and allowed the robot to attack him with a fully charged laser beam attack, leaving Zero to be seemingly destroyed, satisfying Kei. Angered by this, Geed managed to break free with his Geed Claw and attacked Galactron head-on with a Corkscrew Jamming while the latter brought out a shield, but all that resulting in was having Galactron lose his left hand and his braid. It mattered little to the robot however, as he marched from the dust cloud of the resulting explosion and towards an exhausted Geed, whose Color Timer began to flash.

Still enraged by Zero's supposed death, Geed went on the offensive and assaulted the robot, even though his attacks didn't even make a dent in him and Galactron still had plenty enough energy left to fight, but Kei snapped his fingers and Galactron get deactivated as a result as Geed passed out from exhaustion and reverted back to Riku. The next day, Kei reactivated Galactron and the latter continued his rampage until Geed reappeared and challenged the robot once more. The Ultraman held the upper hand at first, but the two of them ended up being evenly matched with each other as Geed tried to chop off Galactron's right hand. Suddenly, Leito miraculously transformed back into Ultraman Zero, kicked the robot in the face and decided to team up with Geed to double team Galactron.

To even the odds, Kei summoned another Galactron from his Riser and while the two Ultras were able to hold their own against the robots in combat at first, they were eventually overwhelmed. After Zero was sent flying thanks to the second Galactron's blade, the human and Ultra were visited by a manifestation of Ultraman Hikari's remaining power via his travel ball. There, he brought and gave them a Riser, an Ultra Capsule Holder, and some Ultra Capsules of Ultramen Ginga, Victory, X, and Orb. With these items, Zero transformed into his new debuted form, Ultraman Zero Beyond.

Zero summoned his Quattro Slugger and launched two for each Galactron and then Geed transformed into his Acro Smasher form before slashing repeatedly at the first Galactron with his Smash Beam Blade at astonishing speed. As for Zero, he punched the second Galactron repeatedly at astonishing speed, then sent him flying with an enhanced punch then back down with an enhanced kick. Afterwards, Geed and Zero destroyed the Galactrons with their Diffusion Shower and Balkey Chorus respectively, even though the latter's target tried to deflect it with its shield, only for it to be easily penetrated upon impact.

Some time before the events of this movie, Gillvalis and the Galactrons caught the attention of the Space Garisson, who sent Ultraman Taro and several Ultra Warriors to deal with them, but they escaped. Ultimate Force Zero was then contacted and were sent to deal with the Galactrons, who targeted Geed's Earth.

Gillvalis sent Galactron MK2 (ギャラクトロン Gyarakutoron Māku Tsū), an improved version of the robot, after Jugglus Juggler was caught snooping around on Planet Kushia. Juggler was chased to Earth, where Galactron MK2 appeared and so did Ultraman Geed. After a quick fight, Galactron MK2 disappeared.

Galactron MK2, who reappeared in Okinawa searching for the Red Steel (Giga Finalizer), terrorized the area until Gukulushisa, Geed, Orb and Zero appeared and fought it, but the Kaiju was defeated easily and retreated. Galactron MK2 was tough enough to withstand all three Ultras' attacks, and even defeated Geed by sending him to cyberspace. After Geed was rescued by Orb, Galactron MK2 unleashed a barrage of energy bullets at Geed when Zero and Orb got in the way to protect him, seemingly sacrificing their lives for Geed. Geed was enraged and performed a point-blank Wrecking Burst that destroyed Galactron MK2.

More Galactrons would appear and terrorize Okinawa and Juggler, having grown to giant size, fought them along with Gukulushisa, but to no avail. Orb and Zero were revealed to have survived the earlier fight by the use of Shining Zero's Shining Star Drive, and they joined the fight. One of the Galactrons killed Airu Higa, who held on to the Giga Finalizer. Ultraman Geed, now filled with new determination, joins the fight as Ultimate Final and the four heroes defeat the invading Galactrons before flying to Planet Kushia to deal with Gillvalis.

Rento Kujo and his wife Nana Kujo were working at a space station, until it collided with a rocket that was sent into space to celebrate the birthday of the president of Cozmo Technica. Ultraman Tregear resurrected him, but Rento was overcome by his desire for revenge, which Tregear readily exploited. The resurrected man attacked the Cozmo Technica president one month later, then transformed into Galactron MK2 after being provoked by Tregear.

Hiroyuki Kudo transformed into Ultraman Taiga to do battle with Galactron MK2, but hesitated because he knew that Rento was inside the robot. Taiga was easily manhandled by Galactron MK2 and was thrown to the floor, unable to retaliate. Suddenly, the light of Ultraman Titas appeared from space, and entered Galactron MK2, whereupon Titas retrieved Rento's spirit, who was reunited with the spirit of his wife. The couple then disappeared into the afterlife, no longer seeking revenge.

Now with no more reason to hold back, Hiroyuki changed to Ultraman Titas, who easily beat down the Galactron MK2, smashing through its axe and sending it flying into a building. Titas then destroyed Galactron with the Geed-let's Wrecking Buster. With its destruction, Hiroyuki obtained the Galactron Ring. Avenger of the Star

Galactron MK2 was summoned again through its Kaiju Ring by Ultraman Tregear in Kansai as bait to summon Woola. While Taiga was able to hold his own against the robot, he was unable to truly damage it. Suddenly, Woola emerged from underneath the oil refinery where Taiga and Galactron MK2 were fighting, dragging the latter down and tearing it apart with its massive jaws. I'm Pirika 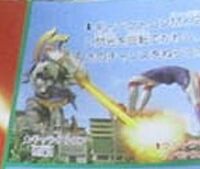 Galactron Fang
Add a photo to this gallery

A figure of Galactron was released in October. The figure was in the DX line though it stands at nearly 10 inches or 25 cm.

Retrieved from "https://ultra.fandom.com/wiki/Galactron?oldid=520619"
Community content is available under CC-BY-SA unless otherwise noted.