None
Gakuzom (ガクゾム Gakuzomu) is a Kaiju from Ultraman Gaia: Gaia Again. Like Zog, he was a prophesied bringer of destruction.

The mighty Gakuzom first attacked a large, peaceful underwater city and sent his legion of fish-like creatures to the surface world. Defenseless, the underwater race of seahorse-like organisms sent out a signal and the strange signal attracted XIG. The defense organization sent out an expedition, but upon finding the city, they also found the source of the fish and their master. Gakuzom slashed out with his claw, knocking XIG out of his way as he teleported himself to the surface. The huge form smashed down, but it wasn't long until Ultraman Agul stood in his way. The creature fought the hero, but when the monster called upon his horde of flying demons, Ultraman Agul quickly found himself outmatched. After being revived by the underwater creatures, Gamu Takayama transform himself into Ultraman Gaia and appeared in the city, ready to battle and help Ultraman Agul. As the fight raged between the stronger Ultraman and Gakuzom, the aquatic creature summoned all of his legion to come to him. The body of Gakuzom began to morph and change, the creature gaining claws and new armor.

Gakuzom attacked Ultraman Gaia with the hero's most powerful attack was simply absorbed into its chest and converted into the strange energy it manipulated in its claws. The beam sent Ultraman Gaia flying backward, but Ultraman Agul would soon find enough energy to help attack the beast once more. With both heroes weakened, it didn't take long for Gakuzom to wreck havoc on them, blasting them both back with its energy blasts. The future looked grim for the heroes, but the organisms beneath the waves emerged, re-powering the heroes with precious energy. The two giants both fired their beams. The two attacks entered the energy converter and overloaded it. Within a few seconds, what remained of the mighty monster was raining around the battlefield. 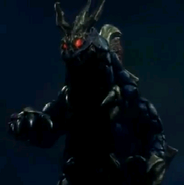 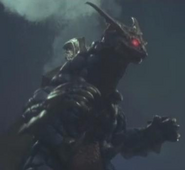 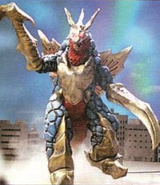 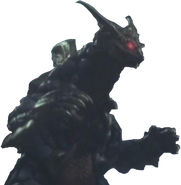