He was summoned to stop the Ultra Guard from finding the Akashic Records thereby finding the evidence that would've undone all of his schemes.

In a short exchanged he down the Ultra Hawk, but when he moved to finish the humans he was picked up by Ultraseven and thrown away. Gaimos fought the Ultra and was quickly trounced, it wasn't until the arrival of his master on the battle field that the two seemingly defeated the Ultra. When Alien Garut ordered the beast to finish the down Ultra, Seven sprang to life and Gaimos was killed by getting the Eye Slugger stabbed into the chest. With this, Gaimos fell to the ground dying. 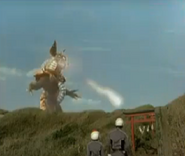