Ultraman Dyna episode 29 "In the Light of Destiny"

Gaigaraid was a monster from space who travelled in the form of a comet. Its course was set on a collision course for Earth, but as detected by Super GUTS's base on the moon. With a diameter of 200 km, it had to be destroyed near the outskirts of the solar system or its debris could still rain down upon the earth. With no alternative of getting there in time, Shin set out in the Plasma Type 100 spacecraft used for breaking the speed of light in order to stop the course of Gaigaraid. With the Zero Drive and Shin's determination he managed to destroy the meteor. However, Gaigaraid still had momentum carrying him through space and blasted Shin as he passed him by. After Shin turned into Ultraman Dyna the two giants fought each other in an asteroid field. Try as the hero could, Dyna had trouble holding his own against Gaigaraid until he broke the space monster's bladed fingers off with brute strength. However, Gaigaraid retaliated by firing explosive asteroids from his stomach at Dyna. Just as Gaigaraid was about to use them again, Dyna used the Solgent Beam in the portal in his stomach and blew him up. In the Light of Destiny

During Gran-Sphere's assault on the lunar base, Neo Gaigaraid (ネオガイガレード Neo Gaigarēdo) was created. It was another Gaigaraid that the Sphere had merged with and was sent to destroy Super GUTS on one of the moons of Neptune. Upon landing it seemed as though nothing could harm Neo Gaigaraid as he made his way to the base. However, before he could destroy the base Ultraman Dyna showed up to do battle with him. It seemed as though Neo Gaigaraid was about to be defeated by the successor of Tiga especially after his arm blade was blown off. However, Neo Gaigaraid used his grapple claw to take Ryo in a fighter hostage and escaped inside Gran-Sphere as it was consuming the planetoid. However, Dyna managed to save Ryo from Neo Gaigaraid, allowing Super GUTS to fire the Neo Maxima Cannon that destroyed him, but not Gran-Sphere. Final Chapter II: Solar System Annihilation 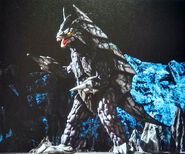 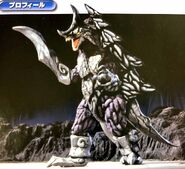 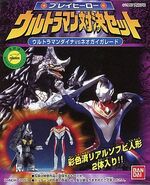