SSSS.DYNAZENON episode 12 "What Was I Entrusted With?"
Gagula (ガギュラ Gagyura)[1] is a Kaiju that debuted in SSSS.DYNAZENON. It was hidden inside the body of Sizumu until he decided to release it.

Gagula's name comes from the term "Caligula effect", a psychological term referring to the guilt and excitement that comes after doing something that a person isn't supposed to do.

Gagula is designed by Masayuki Gotoh, who originally intended the monster not to be based on the limitations of costumed characters.[2] Ironically, Tsuburaya Productions' Light Sculpture Studios built the monster's suit exclusively for the SSSS.DYNAZENON SHOW stage greeting.[3]

Gagula was a Kaiju hidden inside Sizumu's body. He had previously approached Yomogi Asanaka and Yume Minami to feed off their emotions. Gagula provided Sizumu with power that he used to attack them with, but Gauma got in the way instead. Knight then came along and tried to fight Sizumu, but was repelled as well. Sizumu then used Instance Domination on himself, releasing Gagula. Noticing that Gauma was now weak, Knight transformed into Kaiser Gridknight by himself by taking the components of Dynazenon. However, he was no match for the Kaiju. What Wish Can't Come True?

With Gridknight on the ropes, Gagula saw the rest of the Kaiju Eugenicists. Devouring them so it could achieve its second form, Gagula separated Kaiser Gridnight from the components of Dynazenon and prepared to finish off Gridknight, but was stopped by the Dynazenon team arriving. Forming Kaiser Gridknight once again, the team clashed with Gagula in a second round, and proved to be capable of matching the Kaiju on equal terms, even in an upgraded form, with the whole team united. Eventually, Gagula's Mouth Beam clashed with and overpowered the Rex Grid Fire, only for Yomogi to purge Dynasoldier from the combination and use Instance Domination to force Gagula to raise its mouth up, giving Kaiser Gridknight the freedom to separate so Gridknight and Dynazenon could double-team the Kaiju Eugenecists. A Dynazenon Full Burst from below Gagula sent the Kaiju airborne, prompting Gridknight to fuse with Goldburn to form Grid Burn Knight and use his newfound aerial capabilities to destroy the crystal on Gagula's back. Forming Dynarex with Grid Burn Knight on its back, the Blazing Hot Inferno Rex Grid Roar clashed with and overpowered Gagula's Chest Beam, with Dynarex and Grid Burn Knight following up with a punch and ramming attack that finally defeated the Kaiju Eugenecists for good. What Was I Entrusted With?

First Form
The First Form (第1形態 Dai-ichi Keitai)[1] is Gagula's natural state after it is released.

Power Up
Second Form
Gagula transforms into its stronger Second Form (第2形態 Dai-ni Keitai)[4] after taking the other Kaiju Eugenicists into itself. 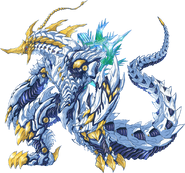 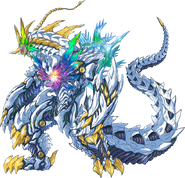