Gagango was a dog named Chirobe that belonged to a child but then, the Alien Gagango that were looking for dogs to transform in giant monsters to invade Tokyo, Gagango was the perfect dog that they could use to transform so they stole the dog and with a machine they transformed Chirobe into Gagango. After the transformation Gagango started to rampage through a small power plant before going into Tokyo. Misaki soon turned into Fireman to stop the giant dog, but going easy on him knowing he was doing this unwillingly. Gagango used his claws and gusts to hold Fireman and the Self Defense Force at bay. The hero eventually used his Fire Dash to transform Gagango back into Chirobe, stopping the Alien Gagango plan. 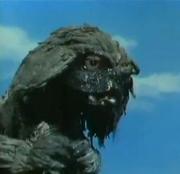 Gagango when he was a dog