None
Gadorasaurus (ガドラザウルス Gadorazaurusu) is a saurian beast that Fireman fought in episode 26, "The Secret of the Mountain Shining in the Evening Sun".

One day in a mountainous area, Gadorasaurus emerged from a mountain of dirt to chop up trees in the local forest. Shortly into his rampage the Scientific Attack Force conducted an aerial assault against the monster. As dusk began to set in both sides withdrew, but not before leaving the vegetation devastated. Gadorasaurus returned the next day, the Scientific Attack Force returning to attack him. Short into the assault Misaki turned into Fireman to combat Gadorasaurus. The bladed dinosaur easily fought off the hero, casually swinging his wrist blades and even batting a rock into Fireman's right leg. Both giants briefly tried to determine who could carry the bigger boulder, Gadorasaurus lifting one so heavy it caused him to sink into the sand below. The bladed dinosaur grabbed Fireman from the back on to get an energy beam to the back by the Scientific Attack Force. While the hero was down, Gadorasaurus pummeled him with boulders until Fireman pushed him back followed by destroying the bladed dinosaur with the Fire Dash. 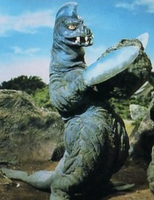 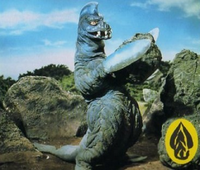 Front view photo from a magazine 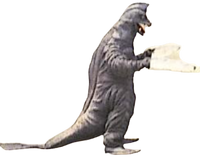 Side view photo from a magazine

Back view photo from a magazine
Community content is available under CC-BY-SA unless otherwise noted.