None
Gadon  (ガドン, Gadon ) was a Kaiju that appeared in episode 14 of The☆Ultraman.

As the meteor known as the Evil Star was passing Earth's orbit, animals from around the world became increasingly violent such as Monkey of the Scientific Defense Guard. The team was called out to deal with a gigantic prehistoric flying reptile named Gadon who was wondering around a volcano. Upon the Scientific Defense Guard encountering the monster, Gadon attacked mercilessly and easily out maneuvered them. Choici managed to distract Gadon long enough for the monster to be focused on him and later allowing him to turn into Ultraman Joneus. Shortly into the fight, Joneus knocked Gadon out with his wrestling techniques and threw the flying reptile into the nearby volcano where he exploded. 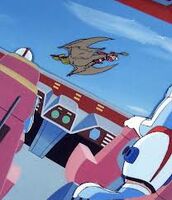 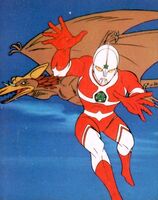 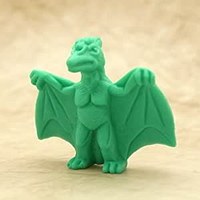 A Gadon eraser
Community content is available under CC-BY-SA unless otherwise noted.