Gabura was the trump card of the Alien Shadow in their invasion of Earth. After his master's ship was downed by Ultraseven, Gabura emerged from the ship and attacked Ultraseven himself. The battle was relatively short and Ultraseven quickly finished the fight by decapitating Gabura with the Eye Slugger. However Gabura's head lived on even without its body and continued its assault on Seven, sinking its jaws into the Ultra's shoulder, causing him to cry out in pain. After rescuing a fortuneteller who had a run in with the Alien Shadow, the fortuneteller exploited Gabura's weakness coming from the ship, and Ultraseven destroyed it with a Handmill Ray. With the ship destroyed, Gabura finally died, his head melted away into a yellow liquid. This happened just in time, as Seven writhed in agony on the ground as the poison took effect. With no time to lose, he reverted back to Dan Moroboshi before the poison could kill him. 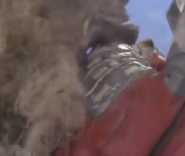 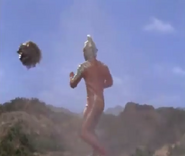 A Marmit figure of Gabura 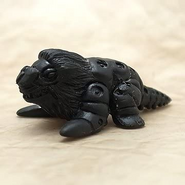 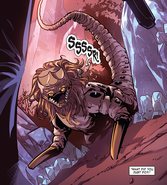