Gabora[2] (ガボラ, Gabora[2]) is an uranium-consuming Kaiju that appears in the TV series Ultraman. It terrorized several radioactive power plants and consumed all the radium it could find. Gabora was eventually lured out and defeated by Ultraman.

Gabora was a Kaiju that was awoken after Hurricane 13 ravaged the land. Feeding on mass quantities of uranium, Gabora began to make its way toward the uranium mines. In order to stop it, the Science Special Search Party was joined by Japan's SDF and massive flamethrower units were deployed against the Kaiju in hopes of stopping it. The beast turned away from the flamethrower attack, changing direction, but now made its way towards a small camp of boy scouts.

In order to save the camp, the Science Patrol tried to lure it away via a small uranium capsule attached to a Science Patrol helicopter, but two small boys had gotten trapped in the path of the creature. As Fuji helped save the children, Shin Hayata released the capsule as Gabora's armor plates exposed its true face. Annoyed by Hayata's presence, Gabora brought down his aircraft with his Uranium Ray. Crawling toward its meal, the beast wasn't prepared to fight Ultraman as Hayata summoned the red and silver hero.

The Kaiju fought hard, but the hero ravaged the reptile. Slamming him down, Ultraman began to rip off the metal plates around Gabora’s head. Screaming in agony, the subterranean titan began to flail about until the pain became too much. The Kaiju fell limp, its eyes closing and life fading. Lightning Operation

Powered Gabora (パワードガボラ Pawādo Gabora) was a Kaiju that fed ravenously on uranium that was being transported to a uranium mine. However, fearing that the mass quantities of uranium that it had fed on previously could ignite and create a nuclear explosion, WINR was forced to let the Kaiju feed until a solution could be found.

After feeding on the uranium, Gabora shifted its next target to the Havens Nuclear Power Plant. With the situation growing worse after a digested bomb failed to ignite inside of Gabora, Ultraman Powered appeared to take matters into his own hands. The battle was at a standstill until WINR exposed Gabora's weak spot: its head. Given this opportunity, Powered fired the Mega Spacium Beam at the Kaiju's head, destroying it.Monstrous Meltdown

Gabora is confirmed to appear in the film Shin Ultraman, marking his first reappearance in at least 26 years.

Powered Gabora is the only Gabora to get an Ultra Monster Series figure treatment. As with all of the UMS toys, Powered Gabora features limited articulation on the arms and legs. His armor "petals" were molded permanently open. 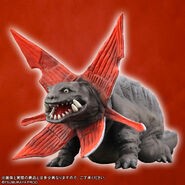 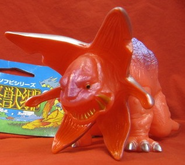 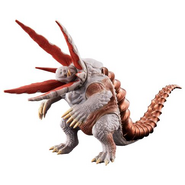 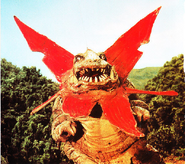 Gabora in the Shin Ultraman trailer, with his armour plating closed.

Gabora in an Ultra Zone sketch 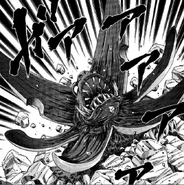 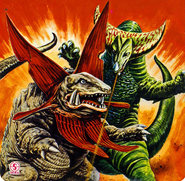