Ultraman Mebius Gaiden: Armored Darkness
GUYS ( Gaizu): The abbreviated name for Guards for UtilitY Situation. CREW GUYS ( Kurū Gaizu) are the monster defense team (operational unit) of Ultraman Mebius. The general headquarters is located in the office of New York and CREW GUYS is deployed in the headquarters of each country. There is also GUYS OCEAN (ＧＵＹＳオーシャン Gaizu Ōshan) which defends the high seas, GUYS SPACY (ＧＵＹＳスペーシー Gaizu Supēshī) which defends the space area, and GUYS ANTARCTICA (ＧＵＹＳアンタクティカ Gaizu Antakutika) which defends the Antarctic Circle.

They have the most advanced technology of any of the past Earth defense teams in the World of the Land of Light.

The team also have archives containing information of monsters/aliens that had appeared in past series. The name of the document is the same as the defense team of the series in which the monster had appeared. These are: Document SSSP (which refers to monsters and aliens that appeared in Ultraman, Document TDF-UG (Ultraseven), Document MAT (Return of Ultraman), Document TAC (Ultraman Ace), Document ZAT (Ultraman Taro), Document MAC (Ultraman Leo), and Document UGM (Ultraman 80), respectively. There is also a category known simply as "Out of Document" (アウト・オブ・ドキュメント Auto obu Dokyumento), which contains information on monsters and aliens that appeared when no defense team was present (such as the time before the founding of the Science Patrol and the period between the annihilation of MAC and the founding of the UGM).

Their special weapons are an advanced fighter jet that can fly at supersonic speeds, helicopters that can fly at slow speeds, advanced cars, trucks and tanks driving on the ground, Advanced Naval vessel right trough the seas, and the capsule monsters. The Maquette Monsters are at first small capsule-like items that grow to their full size by using METEOR (メテオール Meteōru) (The abbreviated name of Much Extreme Technology of Extraterrestrial ORigin). METEOR's power can only be used for one minute at a time.

In the case of a sortie, Sakomizu says "GUYS, Sally Go!" (ＧＵＹＳ、サリーゴー！ Gaizu Sarī Gō!) (When he is absent, Toriyama or Misaki, or Ryu in Ultraman Mebius Gaiden: Armored Darkness, says it), and "G.I.G.!" (GUYS In Green) is said in the case of "Roger!".

Phoenix Nest (フェニックスネスト Fenikkusu Nesuto): The base of GUYS Japan, the base hold digital records of all the previous defense organizations. Unlike previous bases it also functions as a carrier base, through entering Flight Mode, first seen in episode 26. The Phoenix Nest can fire the universal dissolver METEOR to close universal gates and rifts semi-permanently. It was also used to destroy the Space-time wave device. At the end of the series it was badly damaged by Alien Empera. Phoenix Nest also obtained facilities that the crewmen required to stay healthy. This includes a cafeteria, swimming pool, a gym and even a football field.

Blue Whale (ブルーウェイル Burū Weiru): The submersible base of GUYS Ocean, that was first seen in episode 38. It is stated that this massive submarine is armed with an abundance of megaton class torpedoes.

Shingo Sakomizu (サコミズ・シンゴ Sakomizu Shingo) is the captain of the new CREW GUYS and Inspector General of GUYS Japan. Upon assuming his position, he reorganized GUYS with the new members. He loves coffee. He was once a member of VTOL Space who piloted experimental light-speed spacecraft. On a test run 40 years ago to Pluto, his ship was attacked by saucers before Zoffy appeared and rescued him. Although he should be well over 70 years old, the effects of traveling at light-speed have greatly slowed his aging. He has always known that Mebius and Mirai were the same, he is physically 40 years old. Portrayed by Minoru Tanaka.

Ryu Aihara (アイハラ・リュウ Aihara Ryū) is the only surviving member from the original GUYS during Dinozaur's attack. As he becomes the field commander, Ryu is dedicated to protect his new teammates and eventually acknowledges their skill to be on an equal level with past attack teams. He is 20 years old. Portrayed by Masaki Nishina.

Mirai Hibino ( Hibino Mirai) may look like a human, but he is Mebius himself. Instead of using a host, he uses the face of a human he once met in space, and was unable to save. He is an outgoing person and likes to make friends and help people. It is because of him that the current members of team GUYS are members. He divulged his true form to CREW GUYS members in episode 30, though partly due to his choice of appearance. Sakomizu was aware of his identity from the beginning. At the end, he goes back to M78 with Ultraman Hikari. Mebius' personal symbol is the Möbius loop or the infinity sign (as "Mebiusu" is the Japanese transliteration of "Möbius" or "Mebius"). He is 18 years old. Portrayed By Shunji Igarashi.

George Ikaruga (イカルガ・ジョージ Ikaruga Jōji) was a football player and when his teammates left him, he was asked to join GUYS by Mirai. He was a very good football player and developed "The Shooting Star Kick" which was his own move. He has great vision and aim. Portrayed by Daisuke Watanabe.

Teppei Kuze (クゼ・テッペイ Kuze Teppei) is a team member who is knowledgeable in the Ultra Brothers' exploits and their fight against monsters. Being a medical student, he was groomed to become the heir of his father's hospital, but gained the blessing from his parents to continue working on CREW GUYS after his bravery in saving the building from Insectus' invasion.

Konomi Amagai (アマガイ・コノミ Amagai Konomi) is a kindergarten teacher, her dedication to save the rabbits lead to an assembly of civilians that would become future members of CREW GUYS. Although usually works as an operator, she can also join the battle and guiding the Maquette Monsters.

Harusaki (はるさき Harusaki) is a member of Crew GUYS, he was recruited years after Alien Empera's defeat. He scored the highest score in his training division. However, he is shown to act very cowardly and dislikes combat.

Aide Toriyama (トリヤマ補佐官 Toriyama Hosakan) is the leader of the Japanese branch of GUYS, he issues orders to GUYS and gets frantic with joy whenever they accomplish a mission. More or less the public face of GUYS, he is apparently the one who must answer to the news media about GUYS' actions. Gave approval for the use of METEOR until episode 4, when he handed the authority to Sakomizu. While generally portrayed as cowardly, sycophantic and bumblingly incompetent throughout the series, he gathers his resolve and stands up to Inspector Shiki when the latter demands that GUYS turn Ultraman Mebius/Hibino Mirai over.

Secretary Aide Maru (マル補佐官秘書 Maru Hosakan Hisho) is Toriyama's secretary, he follows Toriyama around and often corrects his speech mistakes, and is basically his sidekick.

Yuki Misaki (ミサキ・ユキ Misaki Yuki) is the Acting Inspector General (総監代行 Sōkan Daikō), she reports monsters to GUYS. As with Sakomizu, little is known about her.

Chief Maintenance Araiso (アライソ整備長 Araiso Seibichō) is the chief of the maintenance group which maintains GUYS machines. He very much prizes a pilot's life. The photographs on his wall are the vehicles of the various Monster Attack squads: Jet VTOL of SSSP, Ultra Hawk 1 of UG, MAT Arrow1 of MAT, TAC Falcon of TAC, Condor 1 of ZAT and Sky Higher of UGM can all be seen in his working area. So, if maintenance of machines is needed, he is the stubborn character who fixes and modifies them. He quarrels with Ryu, who forcibly flies the machines despite the needed repairs. He is the leading person who proposed the adoption of METEOR.

Hinode Sayuri is a lunch lady, working at the Phoenix Nest cafeteria. Often referred to as 'mother' by several members of GUYS. She was hit by a car when trying to save a boy and was pronounced dead in the hospital. A Serpentian revived her in order to use her body to destroy the GUYS base, pretending to be touched by Hinode's selfless actions. In order to keep Hinode under his control, the Serpentian eventually took over her consciousness and body. But before the Serpentian could destroy the base, Hinode regained control of her body and helped fight off the Serpentian invasion force. At the end of the episode she is seen going about her life as usual, but now having become both super-strong and super-fast.

GUYS Ocean is the aquatic branch of GUYS. They appeared in episode 38. They made their first appearance in the sub-jet, Seawinger. Their headquarters is located in the massive submarine, the Blue Whale.

GUYS General Headquarters is a central part of GUYS in New York. 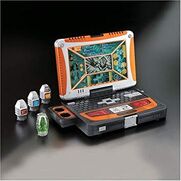 Gun Crusader (ガンクルセイダー Gan Kuruseidā): The fighter jets of the old GUYS which were seen in episode 1. Captain Serizawa pilots one with a red flame paint job.

Gun Speeder (ガンスピーダー Gan Supīdā): The interchangeable pods that form the cockpits of all Gun Type jets. They can be used for deep sea diving and simple flight. They are armed with beam and Phonon maser (a sound gun). Five and one extra Gun Speeder are usually store within the Phoenix Nest base.

Gun Winger (ガンウィンガー Gan Wingā): The front half of Gun Phoenix, its main weaponry are the Beak Vulcan from the nose and Winglet Blasters from the wings. The METEOR powered maneuver mode allows it to use Phantom Aviation (all the jets use it) and fire Specium Missiles, which approach the power of Ultraman's beam. Also, it was used to free Mebius from being frozen by Grozam in episode 46 by using the Magnerium Medicaliser.

Gun Loader (ガンローダー Gan Rōdā): The back half of Gun Phoenix, its main weaponry are Variable Pulsar from the ship's nose, Double Gun Launcher from the horizontal stabilizer of the ship. In maneuver mode it general uses the Bringer Fans to generate tornadoes to grab and throw monsters, it also has the Ventilation Volteccer to blow away fog/toxic gasses and Maxwell Tornado to generate a flaming tornado.

Gun Phoenix (ガンフェニックス Gan Fenikkusu): The backbone of GUYS' anti-monster arsenal. It is made by combining the Gun Winger and Gun Loader.

Gun Booster (ガンブースター Gan Būsutā): First appeared in episode 15. It excels as a high-speed pursuit. Its weaponry is the Altered Blazer fired from the nose. Maneuver Mode can use Spiral Wall which carries out the high-speed rotation of the fuselage, and flips and defends an attack, and Gatling Detonator which carries out the salvo fire of the beam cannon of six gates of both wings.

Gun Phoenix Striker (ガンフェニックストライカー Gan Fenikkusutoraikā): An upgrade from the Gun Phoenix, where the Gun Booster docks onto the back of the previous craft. This enabling a more powerful boost function. The final attack is Valiant Smasher, discharging a beam from all gunports. Maneuver Mode can use Invincible Phoenix which shines the fuselage and fires the Gun Phoenix Striker-like energy wave. It was destroyed by Alien Empera.

Sea Winger (シーウィンガー Sī Wingā): A fighter jet that can go both underwater and above water. It has the same speed and design as the Gun Winger, but is faster underwater. Just like other GUYS aircraft, it also has a maneuver mode. Its attacks are same as Gun Winger. Also, it has a cruising function which allows the aircraft to glide through the seas' surface and diving up to 100m.

Gun Crusader MX (ガンクルセイダーＭＸ Gan Kuruseidā Emu Ekkusu): Makes its first appearance in episode 49. MX is METEOR EXPERIMENTAL. The METEOR-type Gun Crusader which was safekeeping as the spare of Gun Phoenix Striker. It was easily destroyed by Alien Empera.

GUYS Arrow MA1 (GUYSアローMA1, GUYS Arrow MA1) is a jet that is based on the MAT Arrow1 used by MAT. A fleet of them were seen parked beside the runway in the second last episode and were blown apart by Alien Empera. 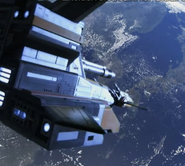