Once mysterious cases happened, they would come together at the Operation Room first, with all seven members using their own specialties to solve it.

Unlike most defense teams, GUTS was not a military unit as the TPC was created after world peace was established. GUTS was originally a rescue/investigation squad, but after it became apparent that supernatural events, extraterrestrial invasions, and Kaiju would frequently appear, GUTS was restructured and their vehicles refit to combat these threats.

The team was disbanded four years after the battle against Gatanothor and its soldiers, and was succeeded by the Super GUTS.

They made their return in Ultraman Dyna, where the team joined forces with the Super GUTS to take down the threat of the Spheres.

The main base of operations of GUTS is the Far East Headquarters "Dive Hangar" (極東本部基地「ダイブハンガー」 Kyokutō Honbu Kichi Daibu Hangā). It is a pyramid-shaped building that is able to submerge into the ocean.

The base houses an abundance of GUTS Wings and other special vehicles. GUTS Wing 1s are deployed from the container-shaped launch bay. GUTS Wing 2s take off from two runways above the GUTS Wing 1's launch bay, hidden and protected by the base's sliding armored structures. Under the base is a massive system of underground hangers. One of the hangars, the F-4 Dock, houses the Artdessei. Before the Artdessei can be launched, the Dive Hangar would elevate itself further above the sea surface to reveal a larger launch bay. The Artdessei would be brought to this launch bay by elevator and launch from the base under its own power.

Megumi Iruma: 36 years old. Before joining GUTS, she was a manager of the special group, working to communicate with E.T. She lost her husband, who had worked with her, in a accident there. She has one son named Tomoki. He was living with grandmother, who held a grudge against her for not stopping her work in the wake of her son's death. Her son's talent regarding computer technology is genius level, even more so than Yazumi, even he is so young. Her ability as GUTS Captain is excellent. All members trust her decisions, especially Munakata who trusts and respects her so much as she saved his life before they joined guts. In The Final Odyssey, it is stated by Camearra that Iruma is the descendant of Yuzare and her reincarnation, as shown when the spirit of her ancestor emerged from her unconscious body to seal the Dark Giants on R'lyeh Island. Seven years after the threat of Dark Giants, she briefly returns to action in Ultraman Tiga & Ultraman Dyna: Warriors of the Star of Light, where she pilots a GUTS Wing upon witnessing the new Ultraman, Dyna who died on the hand of Queen Monera as she also witness the revival of Ultraman Tiga. She also assisted Super GUTS when Asuka and Ryo are captured by the TPC in order for the creation of a new weapon.

Seiichi Munakata: 33 years old. At the front line, he is always cool and level-headed trying to make the correct decision. He was saved by Iruma back in his days on the defense force. His only weak point is a liquor got which he has no tolerance. He has a penchant for drinking milk at jazz bars and wearing a baseball cap in the field.

Daigo Madoka: 23 years old. He was recruited for GUTS member by Mr. Sawai, Supreme general of TPC, when Daigo was working with TPC transportation division. He is the main character of the series; able to transform into the titular Ultraman Tiga. Usually he wields a device called the Sparklence to transform, but sometimes even without it. According to the hologram of Yuzare which is working by artificial intelligence generated program and is supporting Daigo, Daigo has DNA of ancient super warriors called Ultramen around 30 million years ago. He returns in Ultraman Dyna and saves Asuka after the latter's battle with Zeluganoid, then contacts Super GUTS, but not before talking about the responsibilities of being an Ultra with his successor.

Rena Yanase: 22 years old. Her father, Omi Yanase is working at the space center of TPC. She is one of the best pilots in TPC and can control any fighter masterfully. Also, she is an only pilot originally able to drive Snow White, a fighter which uses the power of Maxima Over Drive.

It is shown be the end of the series that she has feeling for Daigo. After the series the two get married and move to Mars where they have two children: Hikari Madoka (eldest daughter) and Tsubasa Madoka (youngest son).

Masami Horii: The scientist and inventor. 28 years old. His position of the story is very similar to Ide from 1966 Ultraman. Horii invented a lot of super mechanics, e.g. Sound Translator, Monster Tracker, Defender against shrink-gun, Barrier Destroyer etc. He gets married to a girl whom he saved from alien monster Magnia. Her name is Michiru Ezaki. She is the daughter of Dr. Ezaki who took the Jupiter III attacked by Ligatron. They would have two children Tsugumu and Mirai. Horii is a fan of the singer Maya Cruz, being a dedicated "Cruz-tian". When this was first stated, Daigo thought he meant Christian. Returns in Ultraman Dyna episodes 35 and 36.

Tetsuo Shinjoh: The tough guy. 26 years old. He has a sister named Mayumi. She is a nurse of TPC medical center. He would have frequent chances to go on a GUTS Wing with Daigo and they were also frequently shot down. The running joke is that they were the worst combination for GUTS Wing formation attacks. He always thinks of himself as good-looking person. Returns in Ultraman Dyna episodes 35 and 36.

Jun Yazumi: An 18 year old computer genius. His main job is to analyze monsters, technology, substance etc, and to research them for information. The system he programmed, named Acachic Record, is a power search engine. It can access and search through any kind of data in the world, not only text data but also image, movie, sound and so on, and of course from anywhere. Also it seems he can access protected data bases. Only his dissatisfaction is that Rena treats him just like her younger brother, not an adult though sometimes he did sees her as an older sister figure while addressing her in the name 'Onee-chan' (sister in Japanese). He returns in Ultraman Dyna episode 50 to help with activating the Neo Maxima cannon.

GUTS uniform and other standard equipments

The mechas used by GUTS are known as Ride Mecha (ライドメカ Raido Meka). 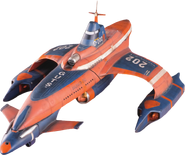 The Manga/Manwha version of GUTS