Fujio Maga (満賀富士夫 Maga Fujio) is one of the side characters in Ultraman Geed. He is also one of the Little Star hosts.

Sometime before episode 16, Fujio was taken to an AIB facility to be safe from any monster threats after he possess a Little Star along with two other Little Star hosts.

In episode 16, Fujio will meet Laiha after she was taken to the same facility after she begin to have symptoms of a Little Star once again. Fujio is the second one to demonstrated the power of his Little Star after Toko to Laiha and everyone else present. Fujio was almost taken by Godo-Wynn after the alien held Tri-Tip at gunpoint, forcing her to open the door to the room where Fujio and the two other hosts is located until Laiha dashed in and fought Godo-Wynn, preventing Fujio from being taken by the said alien. Fujio and the others left the facility when it is partially destroyed by Godo-Wynn when he grew giant size. Fujio later witnessed Belial arrival and the battle between the dark Ultra, Zero and Geed and Belial kidnapping Geed as Chimeraberus and left for the Moon.

In episode 17, after Geed engage in a heated battle with Chimeraberus after sending the said Kaiju back to Earth, Fujio and the other two hosts was brought to the battle scene by Zenna and Moa. Zenna then told Fujio to remove his Little Star is to pass on to Geed. Fujio then cheered for Geed and have his Little Star delivered to Geed after Geed defeating Belial as Chimeraberus. 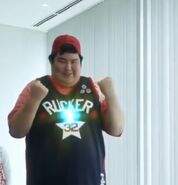