Friends Left Behind (残された仲間 Nokosareta Nakama) is the first Ultraman Ginga side story, continuing where episode 11 left off. Some time after Ginga and Taro return to space, Kenta and Chigusa will investigate the appearance of Alien Magma in Japan.

The episode begins with Kenta as the narrator, and the scene shifts to the moon, where Ultraman and Tiga are fighting against Zetton. He recalls the events that led to this battle happening.

After Ginga's departure from Earth, Alien Magma is seen warming himself beside a fire in Tokyo. He recalls how he was DarkLived into full form with Alien Valky, but Valky was chosen as Dark Lugiel's right hand instead of him, and Magma was made fun of. The same thing happened when Icarus and Alien Nackle Gray were picked, despite Magma training himself to be more useful to his master. Now all alone, Magma screams in despair.

The next day, Kenta is taking Chigusa out for a photoshoot. They remnicise about Ginga leaving Earth, when Kenta spots Magma loitering about, and decide to tail him. Eventually they bump into each other and Magma vents his frustrations on the two, saying that he has been unable to find a job, threatening to attack them. Kenta and Chigusa flee with Magma in hot pursuit.

Finally, when neither of them can run anymore, Magma corners them and whips out Zetton's Spark Doll. Kenta tries to grab it, but is kicked in the chest. Chigusa attempts to reason with Magma, but fails. Magma uses his dark powers to tap into Chigusa's negative emotions and forms a Dark Dummy Spark in front of her. Magma goads Chigusa into grabbing it, but Kenta prevents her from doing so, shattering the Dark Dummy Spark.

Cursing Kenta, Magma DarkLives into Zetton and prepares to destroy Tokyo. Kenta and Chigusa wonder what they can do in their current state, when suddenly, Ginga Light Sparks appear in their hands once more, and with them, the Spark Dolls of Ultraman and Tiga. They transform and force Zetton away from Earth and onto the Moon, beginning their fight.

Tiga and Ultraman's time limits are almost up, and Chigusa and Kenta panic, not wanting to die in space. Ginga gets to them in time and returns them to Earth.

Tiga and Ultraman forcing Zetton out to space. 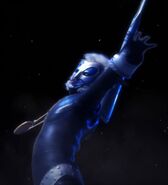