Ultraman Dyna episode 46 "The Power of Thinking of You"
Fohgus (フォーガス Fōgasu) is a Kaiju that first appeared in episode 6 of Ultraman Dyna.

Fohgus is a term in British English that means "Poisonous Mushroom".

An abnormally evolved specimen of a family of mushroom, the specimen, termed Fohgus, evolved the capability of giving itself human forms, intelligence, and more. The creature waited until time was right and smashed its vines out from under the city of Koizumi and controlled the entire city via the tapping of the internet. Super GUTS immediately took notice and sent the GUTS Eagle with a crew of Asuka, Ryo, Kariya, and Nakajima to investigate the giant mushroom. After Asuka descended, he noticed a human shape in the crowd of buildings under the mushroom; that being Fohgus' kaijin interface. Fohgus quickly knocked the human out and dragged him to a building overcrowded with foul air and fungi. Fohgus then explained that "The city you are standing on right now; it is me!"

Fohgus tried to convince Asuka to stop siding with humanity, and their evolution had reached its end. He then tried to ask Asuka to join him but Asuka rejected him. Fohgus then threatened to use the internet to force the TPC Europe base to launch its nuclear torpedoes at the TPC Japan headquarters, destroying it as a warning to humans. Then, Fohgus planned to eliminate the human race and keep the Earth to himself. Asuka, being infuriated, attacked the kaijin, only for Fohgus to vanish and carry out its plans. The giant mushroom then struck down the GUTS Eagle Beta, and the nuclear torpedoes have been launched. However, Koda, while in the Clarkov NF-3000, destroyed two of the torpedoes and Ryo destroyed the third in the GUTS Eagle Gamma. As Asuka pursued Forgas out to the city, Fohgus stated that he will destroy Ultraman Dyna before destroying humanity as he transformed into his monster state. Dyna appeared onto the scene and quickly destroyed the monster. However, a second form behind the giant's back and wrapped him around the neck with its tentacles. Dyna struggled as more formed behind his back. Finally, Dyna managed to destroy the tentacles and changed into Miracle Type, whom then fled the scene to the air, and from a high vantage point, saw the true body of Fohgus using Miracle Type's vision. He then attacked with the Revolium Wave and destroyed the giant mushroom and its monsters. Fohgus, seeing that all is lost, tried to flee into space but was hit by the Solgent Beam and destroyed. The Land's Ultimate Monster

Fohgus reappeared as a member of the Phantom Monster Army. Fohgus had a very minor role, which is scaring a man (who dislikes eating fungi) into a coma. The Power of Thinking of You 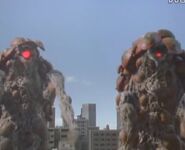