Flying through space with its child, Raidron soon came into view of the Earth. The child it was traveling with was attracted by a fireworks show in Japan. As the massive bird got closer for a better look, it was hit with one of the fire works, and crashed to the ground. Worried, the mother Raidron stayed above to keep an eye on the wounded baby. When Z.A.T began to attack the child, she sent lightning bolts down to the ground. Only when Ultraman Taro healed the baby's wing and returned the child back to her did both gigantic space birds return to space.

Lightning Bolt
Add a photo to this gallery 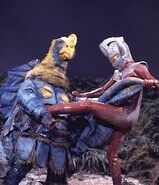 Add a photo to this gallery
Retrieved from "https://ultra.fandom.com/wiki/Flying_Raidron?oldid=320616"
Community content is available under CC-BY-SA unless otherwise noted.