"Burn them all, Flamelar! To overheat magnetron and generate microwaves, and when you have completed..."

A dinosaur-like fire virus, Flamelar was sent into Yuka Inoue's microwave to overheat its generator, turning it into a timebomb. With only three minutes left on the microwave's timer, Gridman made haste to stop Flamelar before Yuka can be killed in the explosion. Using the Plasma Sword, Gridman severed Flamelar's tail and head, but Kahn Digifer recalled the monster before it could be destroyed. With the Fixer Beam, Gridman cooled the microwave's generator. Zero Second to Microwave Oven Explosion

Flamerlar returned and this time was sent into Yuka's air conditioner, heating her home at an unbearable temperature. The monster teamed up with Blizzalar to battle Gridman. But it was by turning the two monsters against with each other that Gridman defeated them with his Gridman Sword. Brother's Bond

Also known as Re-Flamelar, this second incarnation was sent to a hair salon to burn a police officer who stopped Takeshi from peeping at another officer's panties. The attack failed, and Flamelar would be reborn as Mecha Flamelar.

Flamelar was recreated once more, but this time Takeshi placed it in a salon blowdryer to kill a female officer who confiscated his swimsuit magazine. In truth, said book contains sketching of Takeshi's monsters and Khan brought Mecha Flamelar (メカフレムラー Meka Furemurā) to life for the purpose of killing said female officer and protect/eliminate said sketchings. Mecha Flamelar's fire breath was stronger and its armor could emit jets of hot steam. Instead of bad hair days, Mecha Flamelar was overheating the salon's equipment that would eventually kill the customers. Ippei modified the Dragonic Cannon into the Dyna Fighter and blasted missiles at Mecha Flamelar's mouth, destroying its flame power. The monster was destroyed by Gridman's Grid Beam.

Although the salon was brought to normal, Takeshi's secret is safe as his Kaiju sketching fell into the dustbin once a male officer picked it. A Sexy Police Woman in Trouble 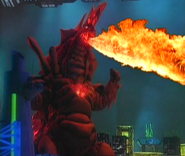 A Flamelar eraser
Community content is available under CC-BY-SA unless otherwise noted.
Advertisement