As inspiration from Icarus' Darklive into Tyrant was used for an in-universe explanation, the first Blu-ray Box release of Ultraman Ginga S confirmed that Five King is a Heisei era take on Tyrant. The main body is Golza, while parts of other monsters are then attached to it, especially the appearance of its components' heads for young viewers to easily identify which monster make up for its body parts.

In Ultraman Z, Junichiro Ashiki is in charge of Tri-King's image design.

By using the Victorium energies that Vorst as Gan-Q collected from Shepherdon, Exceller used the power to Monslive himself with five Spark Dolls, Golza, Melba, Reicubas, Gan-Q, and Super C.O.V., becoming Five King. Exceller/Five King appeared from the sky and challenged Ultraman Ginga Strium and Ultraman Victory to a fight. Ginga Strium and Victory fired their finishers on him but he used Gan-Q's power to absorb their attacks and return, with Shepherdon stepping in and taking the blow. Enraged, Sho/Victory charged but Five King used Golza and Melba's attacks to knock him down. Hikaru/Ginga charged while armed with the Ginga Spark Lance but was defeated by Super C.O.V.'s attack. Everyone could only watched the whole event in horror as Five King roared in victory and retreated.

After ordering Android One Zero to self destruct in the UPG Live Base, Exceller turned into Five King again and rampaged at the city. Hikaru left Sho to battle One Zero, while he borrowed three Spark Dolls, EX Red King, Eleking, and King Joe Custom to battle Five King. He first transformed into EX Red King to fight Five King. He tried to punch him, but his armor proved too much and Five King knocked him down with his Gol Melba Cannon. Hikaru then transformed into Eleking to fight him but his Gan-Q hand absorbed the electricity Eleking gave him and sent it right back at him, defeating him. Five King then went up against King Joe Custom and defeated him by blocking off the robot's energy blasts, grabbing hold of him with his Reicubas Pincer and using his Gan-Q hand to fire with his Gan-Q Beam. With the UPG members finally put their plan to motion, the two Ultras revived and managing Sho and Hikaru to transform. Arriving at Five King, Victory distracted the chimera monster with his Victorium Slashes for Ginga to get close to destroy his Victoriums with his Ginga Spark Lance, reducing Five King's power. Victory goes on the same plan (used Sadola's Sadola Scissors and EX Red King Knuckle to counter Reicubas's pincer and Victory Especially to counter Super C.O.V.'s attacks) while Hikaru/Ginga Strium destroy Five King's parts: Reicubas Pincer with Ultraman's Spacium Beam, Gan-Q hand with Zoffy's M87 Beam, Golza and Melba head with Ultraseven's Emerium Beam, Super C.O.V. torso with Ultraman Jack's Ultra Shot and Melba wings with Ultraman Ace's Metalium Beam and Victory's Victorium Shoot (while the monster tried to escape). He put an end to Five King by using Ultraman Taro's Strium Beam as the monster exploded. Though destroyed, but Exceller managed to escape Five King, unharmed while the dolls were still in his possession and swearing vengeance on the Ultras.

An Eteldummy (エタルダミー Etarudami) of Five King was created by Etelgar out of the memories of Ultraman Tiga, Ultraman Dyna, and Ultraman Gaia, representing all of their old adversaries at one time, before battling them. Tiga changed into Power Type, Dyna changed into Miracle Type, and Gaia turned into Supreme Version. They overpowered the monsters and defeated the ferocious monster with their combined attacks of Tiga's Deracium Beam Torrent, Dyna's Revolium Wave Attack Type, and Gaia's Photon Stream. Ultraman Ginga S The Movie: Showdown! The 10 Ultra Warriors!

Five King's Kaiju Capsule is used by Ultraman Belial as a component of his Chimeraberus form. The First Day of the End of the World

After obtaining genetic samples for Golza, Melba, and Super C.O.V. from a pair of Alien Pitt, Celebro used its powers to force them to track down genetic samples for Gan-Q and Reicubas while he used his newly obtained genetic samples to create their respective Kaiju Medals. Forming Tri-King (トライキング Torai Kingu)[1] as an experiment, Celebro started destroying the city before being confronted by Sevenger and Windom. However, even in its incomplete state, the Combined Monster was more than a match for the two robots, and when Haruki did not appear as Ultraman Z due to losing his Z Riser in the crash, Celebro had Tri-King leave so he could transform back to normal.

After obtaining Kaiju Medals for Gan-Q and Reicubas, Tri-King once again appeared. However, because Haruki had regained his Z Riser, Ultraman Z Alpha Edge appeared to confront it. Just when it looked like Z had the advantage from a barrage of Ultra Burn Kicks, a shot of the Zestium Maser, and multiple slashes from the Z Lance Arrow, Celebro scanned the Medals for Gan-Q and Reicubas, completing the Super Combined Monster. Switching to Beta Smash, Z attempted to land a blow with the Zestium Upper, but was shot down by the Catastrophe Spark before the blow could even land.

However, the tide of the battle turned when Shota Hebikura, not wanting Z to die just yet, gave the downed Ultra Warrior the Ultra Medals for Tiga, Dyna, and Gaia. Using the power of phantasmagoria to obtain a new form, Gamma Future, Z quickly struck with the Zestium Drive before using Gamma Illusion to summon projections of his components for a three-way assault. Z then followed up by trapping Five King in ice with Gamma Freezer before using Gamma Through to enter the insides of the Super Combined Monster and firing his Zestium Beam at its unarmored internal organs, destroying it. Further attempts at forming Five King were subsequently made impossible when Jugglus Juggler confronted Celebro's host, causing him to drop all of its component Kaiju Medals. The Mystic Power

Juggler transformed into Tri-King, and then Five King during Z and Geed's battle with Greeza, attempting to fight back against the Void Monster with the Gol Melba Cannon and the Flash C.O.V. Shot as Tri-King, even trying to absorb Greeza itself into the Gan-Q shield, but was defeated soon afterwards and Geed was subsequently sucked inside Greeza's void. A Warrior's Duty In order to assist with the creation of Ultroid Zero, Juggler assumed Tri-King to assist Alien Barossa III in the fight and used King Joe STORAGE Custom as a meat shield, so that the 1st SAAG would have an opportunity to analyze Z's Zestium Beam to stabilize their D4 Ray. He then transforms into Five King once again, but is defeated by Z after changing to Delta Rise Claw and Gamma Future. Individual Tomorrows The Celebro-possessed Director Kuriyama was present during the fight, where he claimed the scattered Kaiju Medals. A month later, he transformed into Five King for the last time in order to compete against Juggler/Zeppandon over the Ultroid Zero's possession. When Five King used Haruki's life as a bargaining chip, this forced both monsters to engage in a beam struggle that ended in a massive explosion. The Kaiju Medals of Five King were presumably among those used to mutate Ultroid Zero into Destrudos. The Game to Extinction

―Exceller Monsliving himself with the Spark Dolls to become Five King.

The users set their Ultra Access Card into the Z Riser and then places three Kaiju Medals in the slots before sliding the blade and pressing on the trigger.

"Sir Golza. Sir Melba. Sir Super C.O.V.. It's been a while. Let me borrow the power of darkness!"

The Kaiju medals appear around Juggler

Provided that the users are in Tri-King, they place two Kaiju Medals in the slots before sliding the blade and pressing on the trigger. Once doing so, the arms of Tri-King changes to reflect the addition of the extra two components and finally cementing Five King's appearance.

The Kaiju medals appear around Juggler 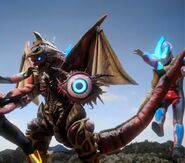 In the first stage show, which took place during July to August 2021, Five King is materialized by Absolute Tartarus by combining the restless spirits of Camearra, Darramb and Hudra. The resulting monster is portrayed by an inflatable suit that is twice bigger than an average Ultra. NEW GENERATION THE LIVE: Ultraman Trigger STAGE 1 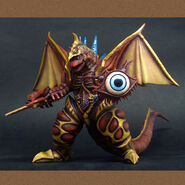 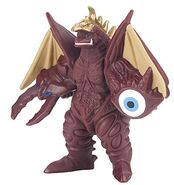 Five King was released as a part of the Spark Doll toyline. Five King has one point of articulation on each limb. Underneath his left leg, he possesses five Live Signs, which represent the five monsters he is consisted of, probably since his own Spark Doll never existed.