Fishman (魚人 Gyojin) (Fishmen in plural) are race of ghost-like aliens that appeared in Ultraman Gaia.

When Zog unleashed a group of Dobishi to Earth for invasion, these Fishmen appeared where they roaming at the city mindlessly moments before her arrival. Despite having appeared and frightening the citizen, they didn't harm them. After she appeared, Zog destroyed a group of them with one of her beams. 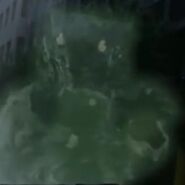