Ultraman Wiki
Register
Don't have an account?
Sign In
Advertisement
in: Heroes, Other Heroes, Protagonists,
and 3 more

Mitsuru Saijō
Fireman (ファイヤーマン Faiyāman) is the true form of Daisuke Misaki, and the actual appearance of all people of the Aban continent, a civilization that had lived underground for the last 12,000 years. When in the form of Misaki, he lives as an archaeologist and as a member of the Earth defense force SAF. When the surface world is attacked by Kaiju and space aliens, Fireman will appear to defend but at the risks of his life, as when in his giant form Fireman will die if exposed to sunlight for more than three minutes. By using the Fire Stick, he transforms and defends the human race against them.

The people of the Aban continent once lived on the surface world but detecting an incoming asteroid they moved underground. Thanks to their great scientific abilities, they not only avoided the asteroid impact but also created a pollution free society thanks to the use of Magma Energy. The society may have inspired the myth about Shambhala.

The youth of Aban were known for excellent intellects and physical prowess, they gained the ability to transform into superhumans using the power of magma energy, power they used to protect the Earth from any crisis until they died out.

Daisuke Misaki crosses both of his arms in front of him, while holding the Fire Stick, gathering magma energy, he then holds the Fire Stick to his chest, then raises the it into the air and shouts "Fire!" to transform into Fireman. 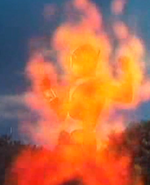 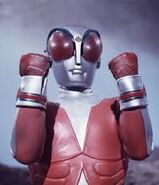 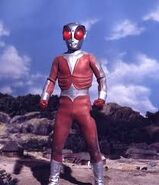 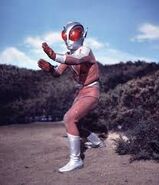 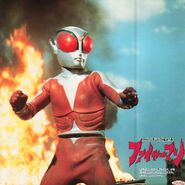 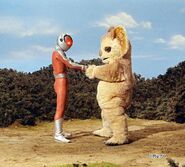 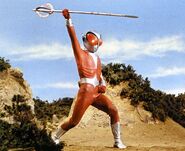 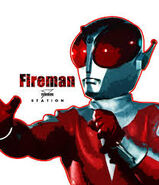 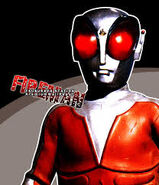 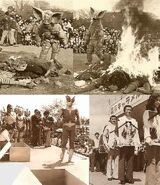 Fireman attends to the Monster Memorial in 1973 for worn out suits. 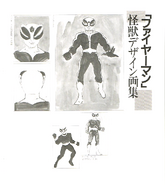