None
Fire Badon (ファイヤバドン Faiya Badon) was a Kaiju that appeared in episode 6 of The☆Ultraman.

The Badon were prehistoric reptiles long thought to have been extinct until one day a member of their species named Fire Badon arose from the Pacific Ocean and decimated a nearby highway. The Scientific Defense Guard was called in to help secure a small fleet of boats in case the monster would show up. Shortly after going out to sea, the fleet was met with Fire Badon and the Scientific Defense Guard tried to fight back. The team successfully forced the monster to retreat to his home near an undersea volcano, but Fire Badon managed to escape. Once at the base, Pig unintentionally gave Hiroki an idea to hunt the monster inspired by eating grapes, planning that Fire Badon had so much energy that they destroy him by giving him more. Upon returning to the ocean floor, the Scientific Defense Guard quickly met Fire Badon and managed to launch a harpoon into the monster's abdomen. Angered by this, Fire Badon used his home terrain against his persuers and forced them to surface upon thinking he died. Just before Fire Badon could finish the unconscious crew, Choichi turned into Ultraman Joneus. Try as he did, Joneus was easily out maneuvered in both air and water by Fire Badon until he set his sights on the harpoon in the creature's abdomen. Once Joneus had a clear shot of the harpoon, he fired the Astro Beam, causing Fire Badon to explode after receiving the tremendous shock of electricity. 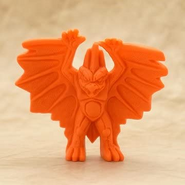