Fire-Draco was a legendary three-headed dragon that was defeated a century ago before the start of Ultraman 80's series. Upon defeat it left behind a stone with three colors. Legend said that it would revive when three chosen ones, representing its three heads, touched the stone which was housed in a shrine. The three were Kubiryu, who could breath flames that would reduce a person to ash, red, Takeshi, the strong man in blue and the boy Mitsuo who was raised in a Shinto shrine who represented White. The other two lied to Mitsuo telling him the stone would help them 'save' the town resulting in their transformation. They fought with Ultraman 80 who was able to defeat them when Mitsuo rebelled as the white dragon head. With two eye shots and a Succium Beam, Fire-Draco was destroyed with 80 removing Mitsuo and the sphere from the corpse. 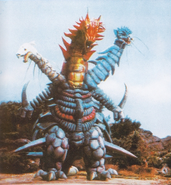 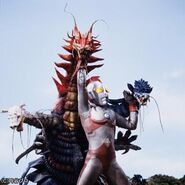 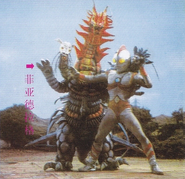