―Father of Ultra to Alien Empera, "Words from the Heart -Final Trilogy III-"

Long ago, Ultraman Ken and his friend Ultraman Belial participated in the Ultimate Wars against Alien Empera and his army, who attacked the Land of Light. In the midst of battle, Ken and Belial were injured when they came across Ultrawoman Marie, who gave Ken the Ultimate Blade, the holy sword with great power, which was a family heirloom of hers. Unleashing his hidden power, Ken and Empera slashed at each other and caused similar wounds on their sides. This caused Empera to flee into hiding. In the aftermath, the people of Ultra decided to form the Inter Galactic Defense Force, with Ken becoming the Top Commander and adopting the title of Father of Ultra. This promotion in status caused Belial to become jealous of him and started his attempt to touch the Plasma Spark's core, an act which caused him to be exiled.

At some point, Ken got married to Ultrawoman Marie, who became known as Mother of Ultra, and had a son named Taro. He also adopted his deceased friend's son, Ultraman Ace.

During the Revolt of Belial, Ken appeared to protect his wife and a younger Zoffy from Belial, who was turned into a Reionics by Alien Rayblood and attacked the Land of Light with his monster army but he was defeated as well. The conflict ended when Ultraman King arrived and subsequently sealed Belial in the Space Prison.

Ken was unable to use his hidden power on Belial, and suffered the consequences for it. In the aftermath, he sealed away his own past form as "Ken", and remained in his exerted state.[1]

Father of Ultra watched the last survivors of Planet L77, Ultraman Leo and Astra, become the first members of the Ultra Brothers to not come from the Land of Light. He was seen again during a flashback in episode 38 where he used the Ultra Key to blow up a small planet. Battle! The Leo Brothers vs. the Ultra Brothers!

Father of Ultra appeared once again in episode 39 along with Mother of Ultra after Astra returned the Ultra Key to the Land of Light, saving it from colliding with Earth. The Leo Brothers and the Ultra Brothers, Time of Victory

During the first episode, Father of Ultra talks to Mebius about the importance of discovering something important, before granting him the Mebius Brace and sending him to Earth to be the newest protector of the planet. A Fateful Encounter When Father of Ultra sensed a great threat, he address his concerns to Mother of Ultra. Champion of the Fierce Fight

Fearing Mebius is unable to defeat an powerful foe, he calls Mebius back to the Land of Light, but the young Ultra disobeys his orders and almost died at the hands of Inpelaizer until his son Taro arrived to save Mebius and forcing the robot to retreat. Day of Separation However, after acknowledging Mebius' courage in protecting Earth along with his comrades from GUYS, Taro and Father of Ultra decided to let Mebius to stay and continue guarding Earth. The Flame of Promise

After Alien Empera descended to Earth, he recalls his duel with Father of Ultra during the Ultimate Wars. Dark Clouds of Despair -Final Trilogy II-

" Father of Ultra: Alien Empera! We will not allow you to put up the Sun's Light which shines down on Earth.
Alien Empera: Why, Father of Ultra? Why saves those lives so comfortabably lit up by the Sun? Darkness is what will become the truly eternal world!
Father of Ultra: Because when there is light, there is also darkness, if there is darkness, there will also be light again."

― Father of Ultra discussing with Alien Empera about the importance of Earth and light.

In the finale, Father of Ultra contacted the already losing Alien Empera that he would not cover the Earth in darkness and explained to him as long as darkness exists, there will be light as well. Words from the Heart -Final Trilogy III-

Father of Ultra appeared along with Mother of Ultra and Zoffy, telling Hikari that he is unsuitable to join the Inter Galactic Defense Force. However, seeing Hikari's determination, he decided to give him a chance to prove himself to be suitable as one of the members. After Hikari defeated Alien Babarue, Father of Ultra accepted Hikari and sent him to Earth to assist Mebius in his battles.

Years passed, and for some reason, the minus energy was growing strong in the universe causing monsters to rampage, Father of Ultra feared that it was all a prelude to Ultraman Belial's escape.

That same day, the alarm to the Inter Galactic Defense Force went of, meaning Belial had escaped. Father of Ultra was completely sure that Belial would go after the Plasma Spark Tower again and ordered a defense placed around it. Ultraman Belial defeated hordes of Ultras, and caused destruction in the Land of Light, Belial eventually made it inside the tower after defeating most of the Inter Galactic Defense Force. Inside after defeating Jack, Ace and 80, he started a fight against Father of Ultra, which Father of Ultra was initially winning, until Belial hit Father of Ultra with the Giga Battle Nizer where he had the scar from his fight with Alien Empera, weakening him and beating him afterwards. Belial defeated Mother of Ultra in a short fight, and as he was tried to kill them both, Taro suddenly appeared and almost died to save his parents from the attack. Belial took the Plasma Spark, and left the Land of Light, completely freezing it, when the cold was arriving to the Tower, Taro invoked his Ultra Dynamite power to protect the of last light that was left on the Land of Light. Father was somewhat relieved that there was still hope as he was left frozen along Mother of Ultra.

In the end, Ultraman Zero defeated Ultraman Belial and recovered the Plasma Spark. After he returned it to the pedestal, all the Land of Light was revived, and all the Ultramen were restored from their frozen states, including Father and Mother. In the end, all the Ultras went to listen to Ultraman King's speech, that their mission was not done yet, and there was still evil in the galaxy that they had to stop.

Father of Ultra makes a short appearance in the beginning of the movie. After Ultraman Zero and Ultraseven defeat a trio of Darklops, they returned to the Inter Galactic Defense Force HQ with a peace that was left from the robot. It was later discovered by Ultraman 80 that this robot came form another universe, but Father stated that only one Ultra was able to go there, because the light in the Land of Light only had enough energy for one, Ultraman Zero volunteered to go, and when he left the Land of Light every Ultra gave him their light, for Zero to start his mission.

Like the other Ultras, Father of Ultra fought in the Dark Spark War and was likely also turned into a Spark Doll by Dark Lugiel. The location of his doll is unknown.

Father of Ultra's Little Star was under Sui Asakura's possession which allows him to perceive anything in the universe. The Ultra Capsule was harvested by Riku after Sui explained the meaning of his name, who finally used it alongside Zero's capsule to assume Geed Magnificient to defeat Pedanium Zetton. After sensing Belial absorbing King's Childhood Radiation from the Land of Ultra with his wife, Father of Ultra went to Earth and held Belial (in his Atrocious Form) with a forcefield, allowing Riku/Geed to regroup with his friends. However, Belial managed to overpower Father of Ultra before watching Geed's battle with the former and sensed his determination to defeat Belial. Father of Ultra compliment Geed alongside King who restored his body and left the Earth.

In this movie, Father of Ultra had Zoffy informing the Ultimate Force Zero to visit Geed's Earth and defending the planet from Gillvalis. Father of Ultra later congratulated the Ultras for their success in destroying Gillvalis. Ultraman Geed The Movie: Connect the Wishes!

In episode 0 Father of Ultra was mentioned by Taro who reveals to his son, Taiga that when he was his son’s age his father also used to lecture him about his training as well.

After Absolute Tartarus's meddling with the timeline resulted in Belial falling under his influence, Belial grew increasingly reckless, and his jealousy towards Ken and his growing relationship with Marie led to him becoming more and more violent during training as his connection to his friend grew increasingly distant. Eventually, following more visions from Tartarus, Belial attempted to steal the Plasma Spark as in the original timeline, but became enraged after touching it and burning his arm. In a frenzy, he descended from the tower and began a vicious fight against Ken, Zoffy and several other Ultras, but fled before he could be defeated, in spite of Ken's pleas for Belial to give up the fight.

In the present day, following the emergence of Absolute Tartarus and his appearance against Zero and the Ultra Brothers, Father of Ultra discussed the situation with his wife, his son, Zoffy and Ultraman 80. Knowing that this was a universe-threatening situation, he dispatched Zero to gather a team to combat the threat. The Divergence

When Taiga returned to the Land of Light following a request from Taro, the boy greeted his grandparents by name. Taro nearly scolded him, telling him to call them by their titles when in public, but the two of them did not mind Taiga's form of address. The Appearance

Father of Ultra appeared in episode 38 of Ultraman Ace as a street Santa Claus to help Ace defeat Namahage and Snowgiran. This was after he had fought Alien Hipporit and was resurrected successfully. During this visit, he brought along Yuko Minami for a visit to see Seiji Hokuto, Ace's now lone human host. 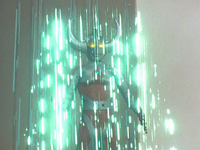 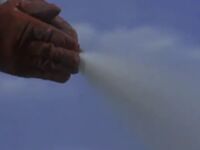 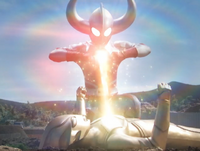 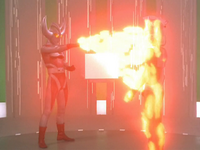 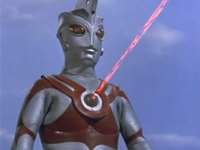 Hidden Power
Add a photo to this gallery 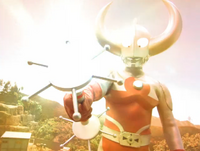 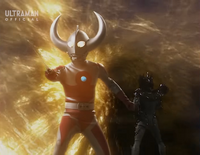 Ultra Key
Add a photo to this gallery 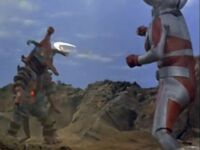 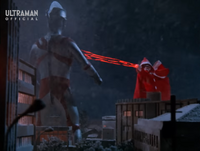 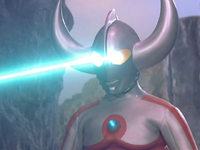 Telepathy Ray
Add a photo to this gallery 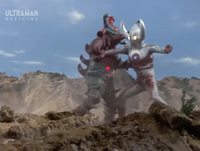 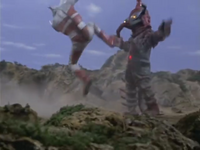 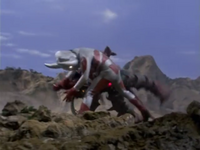 Father Throw
Add a photo to this gallery

Ultimate Thunder
Add a photo to this gallery

Retrieved from "https://ultra.fandom.com/wiki/Father_of_Ultra?oldid=534695"
Community content is available under CC-BY-SA unless otherwise noted.