Faldon first appeared in a mountainous area of Japan. GUTS tried to shoot Faldon but this proved to be ineffective as it was just an illusion. The monster later appeared in city, where GUTS tried to shoot Faldon. Once again, it was just his illusion. When GUTS patrolled the city, Daigo saw Faldon but it was another illusion. The next day, Faldon began his rampage, wreaking havoc on the city. GUTS tried to shoot all of Faldon's illusions but to no avail. Daigo and Shinjoh were shot by Faldon, however Daigo changed into Ultraman Tiga. After putting Shinjoh's plane out of harm's way, Ultraman Tiga prepared to fight Faldon. However, Tiga was overpowered by Faldon and his illusions. Ultraman Tiga then changed to Sky Type and passed through each illusion. In order to stop Tiga, Faldon shot him and created more illusions. Captain Iruma passed through each illusion using her plane but only to be shot by the real Faldon. Knowing the real one, Ultraman Tiga quickly fired the Ranbalt Light Bullet before Faldon can switch to another illusion and saved the captain before flying away. The Mirage Monster 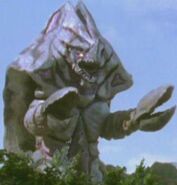