"Humans, behold the God that will rule this world in your place!"

―Karen when announcing her arrival as Faivas

None
Faivas (ファイバス Faibasu) is a robot that appears in episode 42 of the TV series, Ultraman Tiga. She is the perfect form of an AI named Karen E-90 (カレンE-90 Karen Ī Kyūjū), who assumed a human form upon becoming heads over heels for Yamuzi, only to assume this form after he rejected her offer to rule the world alongside her.

When Yazumi won a trip to a large gaming center, Rena came along but they stumbled on something sinister. Rena was captured by an hologram of Daigo while Yazumi was attacked by an old enemy, Alien Muzan. After a short firefight, he was wounded but managed to seemingly kill the alien (in actuality, it was a virtual counterpart). Meanwhile, computers and cellphones throughout the city began malfunctioning. However, in another room, a boy played a game as Muzan and got a game over. Undeterred, the boy selected Alien Raybeak to continue playing. Instantly, Raybeek appeared to attack Yazumi but he was rescued by mysterious woman, whom revealed that an Artficial Intelligence named Karen E-90 had taken over the minds of the visitors. As his wounds were tended to, Raybeek attacked again but luckily, he managed to kill the creature. The two continued to search through the area, trying to discover exactly what was going on and split up. Yazumi discovered Rena trapped in some kind of box. Confronted by the man in charge, he was dropped into a virtual world where an army of UFOs attacked him. When GUTS arrived to examine the disturbance, they were suddenly interrupted by illusions as well, but contact with them was like hitting solid objects. Yazumi managed to destroy all the UFOS but was then dropped into battle with an army of Faivas Robots. Thankfully, Yazumi’s GUTS training let him make short work of them and he was finally confronted by the entity again who distorted, morphing into something else but a single shot seemed to destroy the strange creature, only to be attacked by the girl from before. Meanwhile, outside the entire building was revealed to be another illusion and shattered before GUTS' eyes.

The girl introduces herself as Karen and confronted him while explained the entire place was one of its illusions along with her plan to hack into TPC in order to rebuilding the world under her image. She took over one of TPCs' Station Delta and tried to destroy the Dive Hangar with it, revealing this intent and even hacking into Artdessei. The two talked, the monster having truly grown but Yazumi prepared to attack it to protect Rena, driving the entity berserk. The AI transforms into gigantic machine, Faivas. As the hijacked Artdessei about to fire Neo-Maxima Cannon on metropolis, GUTS, having already arrived, prepared to attack Faivas' virtual world and attacked the giant, only to learn there were a great number of humans inside. Daigo, seeing no choice, transformed into Ultraman Tiga to fight Faivas. At first, it seemed the digital demon was no match for Tiga but the machine analyzed him, developing a fighting style to counter his exactly. The tide turned instantly and the monster began beating. Remembering how kind Karen had been to him, Yazumi tried to confess his feeling but she refused, charging Tiga. With no choice, Tiga fired the Zepellion Ray, vaporizing Faivas. But as it was destroyed, Karen gave Yazumi a final message, saying goodbye as the entire structure dissolved into nothing. 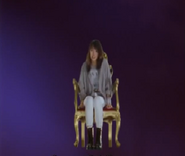 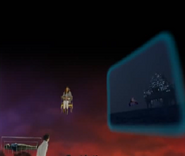 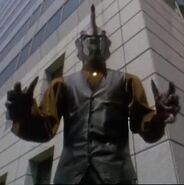 Miniature figure of Faivas, by Bandai.