In use
The Eye Slugger (アイスラッガー Ai Suraggā) is Ultraseven's signature weapon, being described as a Space Boomerang (宇宙ブーメラン Uchū Būmeran). The crest on Ultraseven's head that can be detached and used as a projectile or melee weapon. It is Seven's most well-known weapon, and possibly the most famous of all Ultra items, as well as being one of the most iconic and inspiring items to come from the Ultraman Series, being the base of most, if not all other Sluggers that came after it.

The name "Eye Slugger" was coined during the early pre-production on the series, which was going to be called "Ultra Eye", hence "Eye Slugger." When the title of the series was changed to Ultraseven, the name of the weapon remained "Eye Slugger"—according to official Tsuburaya Productions production notes, published in Kodansha Official File Magazine Ultraman Vol. 4 & 5: "Ultraseven" (2005).

When not in use, Seven mounts the Eye Slugger on his head as a crest. The Eye Slugger can be used as a projectile weapon or as a close range combat weapon, and is cable of cutting through immensely dense objects. Seven can also direct energy into the Eye Slugger as to make its impact more powerful as well as splitting into multiple Eye Sluggers to deal more damage to an opponent. 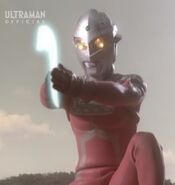