Reverted to a Spark Doll

None, appearance by puppetry and/or CGI

Exceller described himself as the self-proclaimed "Greatest Mind in the Universe", which is shown through his clever manipulation over his subordinates and his schemes in acquiring Victorium Crystals. An ambitious and arrogant Alien Chibull, Exceller has low opinions about everyone, including his own minions whom he treated as mere pawns and will not hesitate to dispose them as soon as they outlived their usefulness. He also proved to be abusive, punishing his subordinates for their failures. Unfortunately for him, his hubris proved to be his worst flaw, as he didn't anticipate that Dark Lugiel's consciousness would return as soon as his body was restored as Vict Lugiel.

A long time ago, Exceller was among the victim of the transformation to Spark Dolls. He was later escaped and 'Lived' through unknown means.

Two years after Ultraman Ginga fought against Dark Lugiel and the reappearance of Spark Dolls, Exceller sent Android One Zero to steal Victorium stones from the underground Victorian civilization so that he can have Dark Lugiel's body. The Opening Force At the same time, he also sought out the help of multiple individuals. Among them are:

Later on, he discovered that the Victorium on Shepherdon was 10 times stronger than any other Victorium and planned to steal it. Past that was Forgotten

Near the finale of the series' first half, he sent Vorst to Monslive with Gan-Q and stole Shepherdon's energy, and One Zero to destroy the UPG Live Base. Vorst eventually succeeded in his mission though at the cost of him being reverted back to a Spark Doll but One Zero failed, not only deactivated but also having her bomb disarmed. Nonetheless, he Monslive on his own with the Spark Dolls of Golza, Melba, Reicubas, Gan-Q, and Super C.O.V. to become the powerful gestalt, Five King. As Five King, he defeated both Ginga and Victory with ease, killing apparently both Ultras in the process. After that, he retreated. One Zero apologized to Exceller and the alien never minded of her failure. Instead, he ordered One Zero to initiate self destruct and he turned into Five King again and rampaged at the city. Hikaru left Shou to battle One Zero, while he borrowed three Spark Dolls, EX Red King, Eleking, and King Joe Custom to battle Five King but to no avail. When the UPG members finally put their plan to motion, the two Ultras were revived, allowing Shou and Hikaru to transform. Arriving at Five King's location, Victory distracted the amalgamation monster for Ginga to get close to destroy his Victorium spikes, reducing Five King's power. Victory continued with the same plan (used Sadola's Sadola Scissors and EX Red King Knuckle to counter Reicubas's pincer and Victory Especially to counter Super C.O.V.'s attacks) while Hikaru/Ginga Strium destroyed Five King's parts one by one via Ultraman's Spacium Beam, Zoffy's M87 Ray, Ultraseven's Emerium Ray, Ultraman Jack's Ultra Shot, and Ultraman Ace's Metalium Beam with Victory's Victorium Shoot. He put an end to Five King by using Ultraman Taro's Strium Ray. Despite this, Exceller survived, swearing revenge and that Dark Lugiel's body would be his soon. Activate! Magnewave Strategy Fight to the Death of the Morning Glow

After Exceller no longer fond of Vorst, he turned him into a rampaging giant alien. Split! UPG Next, he Lived Alien Zetton Berume for him to become Hyper Zetton. With Berume's deed was done, he hijacked the Live Base and outcast Kamiyama and his co-workers to the middle of nowhere while Dark Lugiel fused with the base. Exceller proudly gloated over his victory and declared Dark Lugiel's new form as Vict Lugiel. Resurrection of Lugiel Exceller piloted Vict Lugiel on a rampage and attacking the Ultras. When Hikaru, Shou, and One Zero infiltrated Vict Lugiel, Exceller banished them out with the two Ultra hosts transformed and prepare to battle. Before another beam from Victorium Cannon could be fired, One Zero removed Shepherdon's Spark Doll and quickly return it to Shou/Victory, whom quickly Ultlance it into Shepherdon Saber to destroy Victorium Cannon. Exceller quickly met his demise at the hands of Lugiel when he reveal himself, with Exceller returned to his Spark Doll state. The Adventure Called Life The Fight for Tomorrow 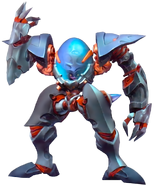 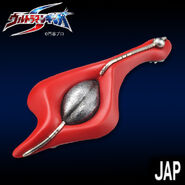 Exceller somehow has an arsenal of Spark Dolls that have not been transformed back into their original forms after Dark Lugiel's defeat. He usually gives these to his followers to attack for his own gains.

As part of the Spark Doll Series, Alien Chibull Exceller was sold as a soft-vinyl doll. Here he was sold with his Chibuloader Strong exosuit, where his figure can be removed by flipping up his windshield and pulling out the alien figure. The suit figure had articulations on his legs and his arms and a Live Sign underneath his left leg that enable the user to use any Spark scanners for toys. If scanned, it would initiate "Ultra/Dark Live, Alien Chibull!", and when used for Victory Lancer's Ultlance, it would initiate "Ultlance, Alien Chibull Tail!". 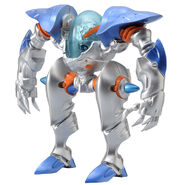 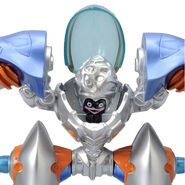 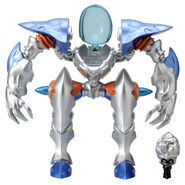 A closer look on Exceller